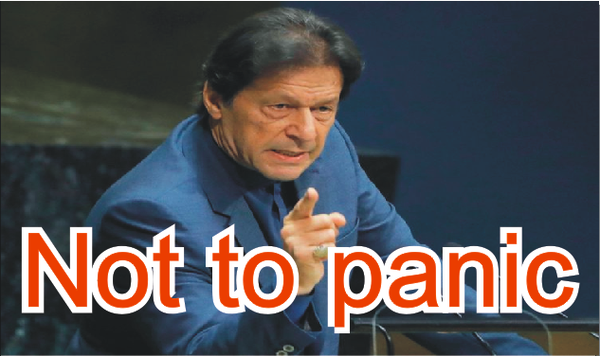 Prime Minister Imran Khan on Tuesday urged the nation not to panic, telling them to act responsibly as the novel coronavirus continues to spread across the country.  Telling the nation not to panic, the prime minister said that the virus was dangerous for old people since it attacked their already-weakened immune system. PM Imran urged people not to panic, saying that 97% of the affectees recovered from the virus.  He paid tribute to the Government of Balochistan and the Pakistan Army for ensuring that pilgrims arriving from Taftan were quarantined. PM Imran said that the government was following the coronavirus situation closely.

The prime minister spoke about the coronavirus situation around the world, saying that the US, Italy and England have reacted differently to the virus. However, he said that Pakistan cannot afford the same response as European countries.  "Our economic situation is very fragile," he said. "If we close down the country, what will happen to the poor? People will die of hunger here," he said.  PM Imran said that his government took the difficult decision to prohibit public gatherings and ban events where public showed up in huge numbers such as the Pakistan Super League 2020.

Put it in your heads, the coronavirus will spread: PM Imran

The prime minister said that an economic committee will determine how the government can cope with the coronavirus situation. PM Imran said that he feared food prices will once again rise as profiteers and hoarders will once again resume illicit activities. "I want to warn these people [profiteers, hoarders] not to make money from the people's misery," he said. "The state will take stern action against you."

He said that the virus was spreading in countries and the government was studying responses of other governments and how they were acting to eliminate the pandemic.  Be responsible; avoid large gatherings and shaking hands: PM Imran

The prime minister urged people to join hands with the government in its 'war' against the novel infection and act responsibly. He urged people to avoid large gatherings and refrain from shaking hands with each other. PM Imran urged the nation not to panic and said that every person should not get himself/herself tested based on only mild flu symptoms. He said that testing kits should be used for only people who were really suffering from the novel virus.  "Aap ne ghabrana nahi hai [You don't need to panic]," he said. "It is our belief that life and death are in the hands of Allah." He praised the efforts of doctors and nurses and said that the government will help them in their 'Jihad' against the coronavirus. PM Imran said that he understood the plight of overseas Pakistanis at this hour, especially the Pakistani students who were stranded in Wuhan. The prime minister addressed the country's Ulema and said that it was their responsibility to play a positive role in the crisis.