POL prices come down a bit 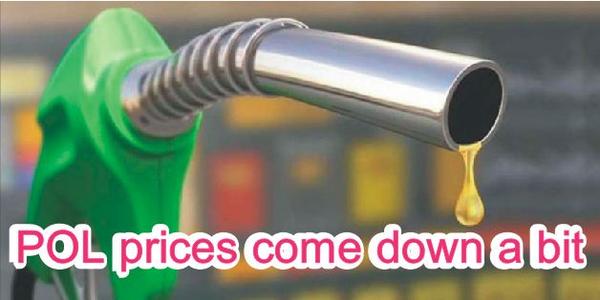 ISLAMABAD    -   The government has decreased prices of petroleum products but the announcement about it was marred by confusion as three different ministries gave their own versions of the prices cut. As per the decision, taken by the finance ministry on the advice of Ogra, the per litre price of petrol for the month of September, effective from today, has been reduced by Rs4.59.

The reduction in prices has come mainly owing to the falling of crude oil price in the international market. And, through this decision the government has passed on the benefit to the consumers. Oil and Gas Regulatory Authority (Ogra) had suggested reducing the per litre price of high speed diesel by Rs7.67 (or 5.79 percent), petrol by Rs4.59 (or 3.89pc), light diesel oil (LDO) by Rs5.63 (5.77pc) and kerosene oil by 4.27 (4.11pc).

An overexcited Special Assistant to PM on Information Firdous Ashiq Awan posted the screen shot of the Ogra recommendations on her twitter account a day before the acceptance of the proposal by finance division, giving the impression like it was the final schedule of the prices. She said that the “people-friendly” government has decided that instead of filling its own coffins it will pass on the benefit of lowering international oil prices to the citizens.

According to her tweet the per litre reduction in the prices were Rs4.59, Rs7.67, Rs5.63 and Rs4.27 for petrol, HSD, LDO and kerosene oil respectively. Firdous’ announcement prompted Petroleum Minister Omer Ayub Khan to also tweet about the lowering of the prices. According to his tweet the cut in prices was Rs4.59 for petrol, Rs5.33 for HSD, Rs5.63 for LDO and Rs4.27 for Kerosene Oil.

The two tweets showed the same price prices except for the HSD. Instead of a Rs7.67 cut in per litre price of diesel, the minister stated it to be Rs5.33. Interestingly, last month when the prices of petroleum products were going up the entire government machinery was hiding from media and no one cared to issue any statement.

According to the press statement attached with Omer’s tweet the POL prices are determined by Ogra using actual orders placed by PSO for HSD and petrol for the outgoing month/period. Predefined costs like freight, port handling and OMCs/retailer margins are then added by Ogra. Since three months, the GST has been fixed at 17 percent, when in the FY 2015-16 it had gone to as high as 71 percent on HSD. PDL is also fixed. So, any variation in purchase price of PSO over the last imported period is notified by Ogra. If the international prices show a downward trend, this occurs with 30-40 days, subject to exchange rate movement.

The average purchase price of petrol (inclusive of customs duty) over the last imported period has been Rs71 89 per liter and that of HSD Rs82.06. After adding taxes and distribution charges in purchasing cost of petrol and diesel, over last month, the ex-depot sale prices are fixed at Rs113.24/liter and Rs127.14/liter respectively. These prices in terms of rupee parity for petrol are significantly lower than regional markets like India (Rs162.5 per liter), Sri Lanka (Rs144.15 per liter), Bangladesh (Rs168.79 per liter) etc.