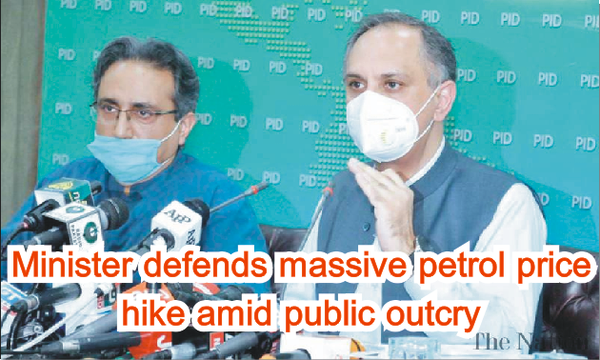 ISLAMABAD - Federal Minister for Power and Petroleum Omar Ayub Khan on Saturday said that the government has increased the petroleum products prices due to the hike in its prices in international market and rupee depreciation. He said that price increase of oil products is only by 25 percent as against 112 percent price raise in the international market. However, petrol prices are still lower in Pakistan as compared to that in other countries of South East Asia, he said at a press conference along with Adviser to the Prime Minister on Petroleum Nadeem Babar here.

Petrol price in Pakistan is Rs100 per litre, Rs180 in India, Rs137 in China, Rs174 in Bangladesh, Rs108 in Indonesia, Rs153 in Philippine, Rs159 in Thailand and Rs196 per litre in Japan. Babar informed that the government had already fixed the General Sales Tax (GST) on oil products at 17 percent and Petroleum Development Levy at Rs30 per litre as per vision of Prime Minister Imran Khan.

He said that the petrol price was Rs116.6 per litre on February 28 this year, which is still currently lower at Rs100 per litre. He also defended the government’s decision of announcing new oil prices on 26th of June instead of last day of the month. “The government would have to increase the petrol price by Rs31.5 or Rs32 per liter if the decision was made on June 30,” he said and added that the Prime Minister had directed to put minimum burden of increasing oil prices on masses.

He claimed that Oil Marketing Companies (OMCs) would still face losses in July despite the government has increased the oil products. Talking about the recent petrol shortage in the country, the Adviser said that OMCs had limited stock of petrol, which resulted in its shortage in different parts of the country. The OMCs should have 21 days stock of petrol as per their agreement; however, they had stock of 7 to 18 days.

He said that the government would review the rules and regulations to strengthen the Oil and Gas Regulatory Authority (OGRA) to deal with oil shortages in future. He informed that there are 9000 registered petrol pumps while 1500 are working illegal, which had also played a role in the petrol shortage. The government would close all illegal petrol pumps to avoid any petrol shortage in the country, he added.

On a question, the Adviser said that the Finance Bill 2020 had empowered the federal government to collect up PDL on oil prices by up to Rs30 per liter. He rejected the impression that the government had enhanced the oil prices on June 26 instead of June 30 only to increase the tax revenues for Federal Board of Revenue (FBR). He clarified that the government has not changed the rate of GST on petroleum products, which is still 17 percent.

Omer Ayub said that the PML-N government had stopped the investigation of oil shortage in 2015. While quoting a report, he said that investigation officer of the report Tariq Khosa had written that then finance minister had asked to stop the investigation. Had the PML-N had taken action against oil mafia at that time, the country would not have faced the recent crisis. He vowed that the incumbent government would take every possible action against mafias to provide relief to the masses.