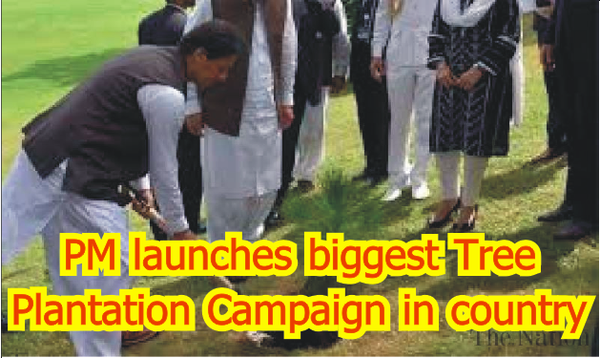 Prime Minister Imran Khan has launched the country's largest tree plantation campaign on Sunday with the aim of planting 3.5 million saplings in the country in a single day. Addressing a ceremony in Islamabad, the premier began his address by thanking all those who had participated in today's campaign. He stated that Pakistan was among the top ten countries most affected by climate change. "Our wheat production has fallen over the past two years due to climate change and unprecedented rainfall." If we keep continuing on this path, then some of the areas will become deserts, he said. "It is our responsibility to make the country green for future generations," he said.

"The 3.5 million saplings that we have planted is just the start. This is a constant, ongoing battle, but we are not doing this for us. We are doing it for the coming generations," he said. "This is just the beginning. This is a long battle, but thankfully we have started the process," he said, vowing that trees would be planted in "empty spaces" in cities. The premier also urged women to participate. "The women have to participate the most," he said.  "The target is 35 lakh trees in a day though we will try to exceed it," the premier had said.

He had added that two million saplings will be planted in Khyber Pakhtunkhwa, 1.2 million in Punjab, 303,646 in Azad Kashmir, 57,000 in Balochistan and 15,000 in Gilgit-Baltistan. There have been 682 events organised across the country. NGOs and international NGOs, educational institutions and local communities will also participate. Earlier today, Punjab Chief Minister Sardar Usman Buzdar launched the plantation drive in the province by planting a sapling at an artificial forest at Shadman Market in Lahore.