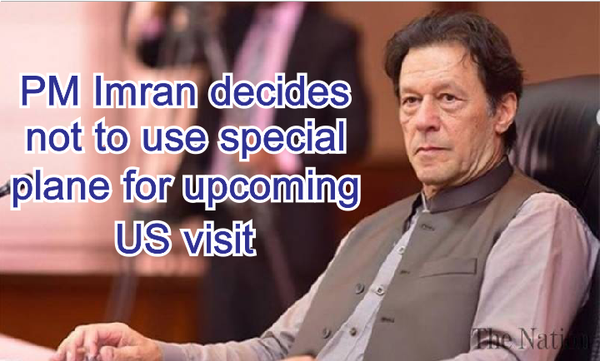 Prime Minister Imran Khan has decided once again to adopt austerity measures during his upcoming visit of the United States (US) by avoiding to travel through special plane.

Sources said that PM Khan will use a commercial plane of a private airline during his US visit which would cost $162,000 to the national exchequer. It would be the lowest ever budget in the national history for a premier’s visit to New York. It may be noted here that the previous visits to the US by the former state heads had spent millions of rupees in term of expenditures, whereas, PM Khan had set an example of austerity by spending only $67,180 on his last visit to the United States (US) over the invitation of President Donald Trump.

The details become an eye-opener for all as the previous visits by the then heads of the state had put a heavy financial burden on the national exchequer. According to the details, the former president and Pakistan People’s Party (PPP) co-chairman, Asif Ali Zardari, had paid a six-day official visit to the US in 2009. Approximately $752,688 spent on his visit to the US as per the details obtained.

When it comes to the visit of former prime minister Nawaz Sharif, the premier’s six-day stay in the US costs $549,853 to the national exchequer. Whereas, the revelations surprised the austerity move adopted by the present government of the Pakistan Tehreek-e-Insaf (PTI) as PM Imran Khan’s visit to the US was concluded with the expenditure of only $67,180 which saved millions of rupees’ spending from the public funds. PM Imran Khan had neither traveled through a chartered aircraft from the state-owned airline not he had stayed at any 7-star hotel and did not bring any of his relatives during the US visit.