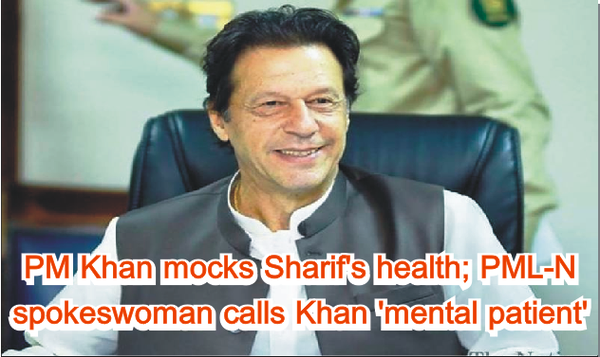 After Prime Minister Imran Khan raised questions about the health of Nawaz Sharif in a foundation stone ceremony in Mianwali, the Muslim League-Nawaz (PML-N) spokesperson Marriyum Aurangzeb lashed out at the prime minister for his "insensitive" comments. "The issue here is that the government's performance is zero," she said. "He should have spoken about how the Peshawar BRT cannot be completed even after five years."  Aurangzeb also suggested that PM Khan be made to get a medical examination, saying that her party was convinced he was a "mental patient". In Mianwali, PM Khan had made comments to the effect of questioning the veracity of the medical reports of Nawaz Sharif.

"After seeing him climb the stairs of the airplane, I once again looked at the medical reports," he said. "The reports said that his heart was also in a bad condition, his kidneys were also not well and he had diabetes. I said to myself 'God is great'," he added sarcastically. In a mocking tone, PM Khan said on Nawaz Sharif: "Maybe he looked at the plane and got healed since it was such a magnificent plane. A common man cannot travel in such an aircraft."  Earlier this week, the prime minister was criticized for mimicking the Pakistan People's Party chairman Bilawal Bhutto-Zardari at the inauguration ceremony of the Hazara motorway.