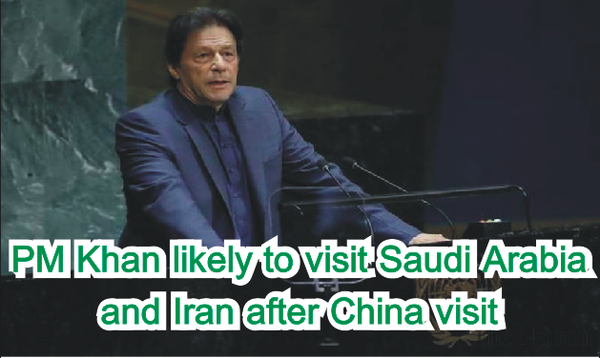 Prime Minister Imran Khan is likely to pay visits to Saudi Arabia and Iran after concluding his ongoing three-day visit to China, sources said on Wednesday. The role of PM Imran Khan gets significant importance for the establishment of regional peace as the preparations for his next visits have been commenced, diplomatic sources said. PM Khan will hold consultations for his next visits after returning home from China. Sources added that the date for his visit to Saudi Arabia and Iran will be decided after holding consultations.

The premier’s visit to Iran is said to be very crucial after he had offered to act as mediator to defuse tensions in the Middle East over the request of the US President Donald Trump and the Saudi Crown Prince Mohammed bin Salman during his visit to the United States (US) while attending the session of the United Nations General Assembly (UNGA). However, it emerged earlier that PM Khan will visit Saudi Arabia on October 29 to participate in three-day Future Investment Initiative (FII) 2019 in Riyadh over the invitation of Saudi King Salman bin Abdulaziz Al Saud. It is pertinent to mention here that the Saudi Arabian government had also invited Indian prime minister Narendra Modi in the upcoming event.

The premier is currently on an official visit of China after he had arrived in Beijing on October 8. Foreign Minister Shah Mehmood Qureshi, Planning Minister Khusro Bakhtiar and Chairman Board of Investment Zubair Gilani are also accompanying Prime Minister Khan during the visit. The PM met the Chinese leadership and exchange views on regional developments including the state of peace and security in South Asia arising from the situation in occupied Jammu & Kashmir since 5 August.

During his visit, Prime Minister Imran Khan held wide-ranging bilateral talks with his Chinese counterpart Li Keqiang at the Great Hall of the People in Beijing. The exchange of views particularly covered the strengthening of bilateral economic partnership, according to a press release. Chief of Army Staff General Qamar Javed Bajwa and Director General Inter-Services Intelligence (ISI) Lieutenant General Faiz Hameed were also present during the meeting. Prime Minister Imran Khan also held a meeting with Chinese President Xi Jinping in Beijing. Both the leaders discussed the entire spectrum of bilateral relations, regional situation and matters of mutual interests.