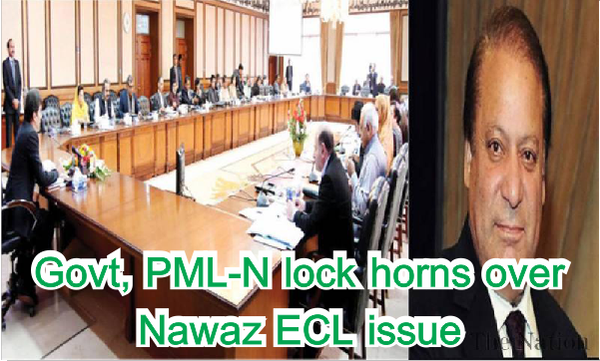 ISLAMABAD - In a dramatic turn of events on Tuesday, the PTI government and the PML-N locked horns over the issue of removal of Nawaz Sharif’s name from ECL enabling the former prime minister to travel abroad for medical treatment. First the Federal Cabinet decided to “conditionally” allow Nawaz Sharif to go abroad for medical treatment if he agrees to sign surety bonds making a commitment that he would return after the treatment and face corruption cases against him. In reaction, the former prime minister refused to accept any condition by the government to fly abroad saying he will prefer to stay home instead of bowing down. Later, a sub-committee of the Federal Cabinet reserved its recommendations regarding the removal of Nawaz Sharif’s name from Exit Control List (ECL). Talking to the media, Law Minister Farogh Naseem who heads the committee, mandated to take a final decision on the ECL issue, said “The committee cannot define any timeframe to announce its recommendations.”

Subcommittee to forward its proposals to Cabinet

The Federal Cabinet has discretionary powers to accept the committee recommendations or otherwise, he added. It may be added that the committee held three marathon sessions on Tuesday to discuss specific time period for Nawaz Sharif to remain abroad for treatment and the conditions including submission of surety bonds. The Federal Cabinet which met with Prime Minister Imran Khan in the chair granted in-principle ‘conditional’ approval to remove name of ailing Nawaz Sharif from ECL. The divided federal cabinet favoured removing Nawaz’s name from the ECL with a majority vote. “The prime minister had to conduct a vote, in which a ‘majority’ of the cabinet members favoured removing Nawaz’s name from the ECL,” Special Assistant to Prime Minister for Information and Broadcasting Dr Firdous Ashiq Awan said after the cabinet meeting. Addressing a news conference about the decisions taken by the federal cabinet, she said in-principle ‘conditional’ approval had been granted to remove name of Nawaz Sharif from the ECL.

Firdous said about ‘85-90 percent’ participants of the meeting were of the opinion that Nawaz should be allowed to go abroad for medical treatment provided he meets certain conditions. She said Law Minister Farogh Naseem shared the recommendations given by the 14-member medical board examining Nawaz, the opinion of the National Accountability Bureau  and his own view with the cabinet regarding allowing the former prime minister to proceed abroad. A private TV channel quoting Firdous said there was a consensus of all members on the points that Nawaz Sharif should not be given ‘unconditional relief’, he should be legally bound to surety bonds, indemnity bonds, security and fines imposed on him by courts, the permission to go abroad should be a ‘one-time waiver’ and the relief should be ‘time-bound’. According to Firdous, the above conditions were communicated to the Sharif family. The parameters that will bind the PML-N leader’s family to ensure the surety and guarantees will be determined during the meeting of the cabinet sub-committee on ECL when it meets for the second time today (Wednesday) at 9:30pm, the channel further said quoting the special adviser.

Separately, prime minister’s spokesperson Nadeem Afzal Chan, talking to a private TV channel, said the cabinet had given its sub-committee the mandate to decide process of removing Nawaz’s name from the no-fly list. He said several members of the cabinet had opposed striking the PML-N supremo’s name off the ECL, adding the prime minister gave his opinion after hearing the viewpoints of all members. “The prime minister was of the opinion that Nawaz Sharif should go abroad for treatment,” the spokesperson said. He stressed that it is not the government, but the NAB and courts, which “have to be given guarantees” regarding Nawaz’s time abroad. After receiving the Cabinet’s proposal, Nawaz Sharif refused to accept any condition by the government to fly abroad for medical treatment saying he will prefer to stay home instead of bowing down.

PML-N sources told The Nation that Sharif was furious over the government’s delaying tactics and “illogical conditions.” Sharif was quoted as saying that the government’s conditions were “unacceptable” as the court had not attached any strings. The three-time PM held meeting with younger brother Shehbaz Sharif at his Jati Umra residence after the government put forward different conditions to lift the travel ban. “Nawaz Sharif is still ready to go abroad but is unwilling to accept any condition that can give the impression of a “deal,” a close aide of the Sharif family said. The federal government meanwhile has decided not to let Nawaz Sharif go abroad unconditionally. The decision was taken by a sub-committee of the federal cabinet, headed by Law Minister Farogh Naseem. Earlier, a meeting was held which which was attended by the law minister, PM’s aide Shehzad Akbar, PML-N leader Atta Tarar and officials of the NAB among others.

The committee decided to lay different conditions before the Sharif family before Nawaz Sharif’s departure abroad. The conditions would include deposition of surety bonds, a no-objection certificate from court and others. PML-N’s Atta Tarar said the court had allowed Nawaz Sharif to travel abroad on grounds of his health. He questioned the government’s demand for a guarantee. The parties will again meet today (November 13) to reach a consensus. However, the PML-N is not ready to accept the government’s demands. The PML-N has already clearly told the government it cannot give a return date for Nawaz Sharif as he prepares to fly abroad for medical treatment. The government had pressed the PML-N to give a proper date on Sharif’s return from the United Kingdom as a condition to lift his travel ban. “How can we give a date when his (Sharif’s) condition is so critical? The government is just trying to misguide the nation by putting such conditions. The bail by the court is for eight weeks so we already have a timeframe,” a close aide of the Sharif family told The Nation. He said the PML-N had conveyed its decision to the government, adding Nawaz Sharif was not willing to strike any deal with the government. Another PML-N leader said Nawaz Sharif could fly to the United Kingdom any time if all formalities are completed.

Nawaz has submitted surety bonds in the court.

In a statement, the spokesperson said the former PM was already taking high dose of steroids which was further affecting his health. She said the doctors had suggested to shift Nawaz Sharif abroad for medical treatment on immediate basis.

She said national economy remained hot topic of discussion among the agenda issues taken up by the federal cabinet for consideration. She said federal cabinet had affirmed that positive impacts of improvement in economic indicators will be passed on to public. She said Adviser to Prime Minister on Finance Dr Hafeez Shaikh apprised the cabinet of improvement in economic indicators, the government’s policies leading to encouraging economic results and the problems faced by common people and strategies to resolve them. He also informed the meeting of achieving the targets successfully and surpassing them in first quarter of current financial year in the areas of revenue collection, taxes, industrialisation, export-oriented strategy, foreign reserves, remittances, economic stability and inflation. The adviser further informed the meeting that due to economic turnaround, the ultimate beneficiaries will be people of Pakistan. The prime minister appreciated the improvement in economic indicators and performance of the economic team and also directed to disseminate information to public regarding these positive impacts. She said Pakistan’s economic policies had restored confidence of international financial institutions including the IMF. The prime minister once again directed all provincial governments to expedite measures to control inflation and prices of essential items. The performance of the provincial governments will be measured in how much reduction in prices their actions had brought so far.