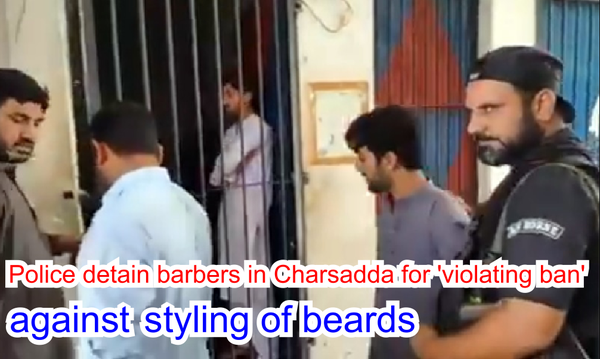 Khyber Pakhtunkhwa police in Shabqadar tehsil of Charsadda detained at least four barbers for styling customers' beards despite an unofficial 'ban' imposed by a local traders' union which had termed such beards "un-Islamic", it emerged on Thursday.

The incident came to the fore in a video widely circulated on social media this week.

In the video, a man named Sameen, who is the president of the shopkeepers union, can be seen guiding police in the arrest of the hairdressers. He asks the hairdressers why they were shaping beards in a "stylish" manner, when there is a "ban" in place on the same.

According to Sameen, some days back the union had "banned the designing of beards" and had informed all hairdressers of the same. “Despite our decision, some shop owners were trimming the beards in stylish designs,” the union leader said in the video.

He goes on to say that on the union's complaint, police had arrested four employees from different barbershops. "Police have imposed a fine of Rs5,000 on them each and warned them not to shape beards in that fashion," he claimed.

Shabqadar police station confirmed the detentions, which took place on September 30. An official on duty at the station told DawnNewsTV, on condition of anonymity, that the police had received a complaint from an office-bearer of a traders' union.

"They complained that despite a ban on giving a stylish shape to beards, some hairdressers were still doing so," said the police officer, adding that the men were released after a few hours in detention.

"We did not register an FIR (first information report) or fine them and released them on the request of the union," he said, explaining that the detained men had provided assurances that they would not style beards in that manner any more.

However, Charsadda District Police Officer denied any police action against hairdressers for styling beards in various designs. He told DawnNewsTV that a police party had conducted a raid and arrested hairdressers "to resolve a petty dispute between two hairdressers".

“Two workers had attacked each other and the police had arrested four men,” he said.

The hairdressers who were detained could not be reached for comment.

Separately, a hairdresser named Asif recalled that a similar decision to "ban" the styling of beards was taken in a meeting of the All Pakistan Hairdressers Union held in Charsadda a few months back.

He said that the decision had received appreciation from the people of the tehsil and religious elders. The hairdresser said he also appreciated the police action.

A couple of months ago, a union of hairdressers in Peshawar had also decided to ban the shaping of customers' beards in stylish designs, terming it "against Islam".

The decision had been taken in a meeting of the Frontier Professional Hairdressers Association, which claims to be the only registered and representative body of local barbers. The meeting was held in Peshawar and was attended by office-bearers from across the province, according to the president of the association, Muhammad Sharif.

He had told DawnNewsTV at the time that the participants had agreed on not designing beards in different styles including "French and other cuts", claiming that after the decision, a majority of barbers in Peshawar had stopped styling their customers’ beards.

The association had also distributed pamphlets in Peshawar and other districts, asking the barbers to stop styling beards. In Peshawar’s Sikandarpura, Circular Road, Hashtnagri and other areas, barbers have displayed the pamphlet at the main entrance of their shops saying that they are in agreement with the decision.

“We have taken the decision independently and without any pressure,” Muhammad Sharif had said, arguing that designing beards is against Islamic laws and sunnah.

“If anyone does not stop and continues the designing of customers’ beards then the association will take action against the violators,” he had declared, adding that the association would also contact the provincial government and district administration to enforce the decision.

Shabir, a barber on Circular Road, had displayed the pamphlet on the main door of his shop announcing that he has stopped designing beards after the association’s decision. “We were styling beards as per our customers' demands,” he said, adding that he refuses to do so now.

“Yes, the decision will affect the business as nowadays a large number of youngsters come just for the styling of their beards," he acknowledged.

However, a barber at Gulbahar disagreed with the association's decision. “Our association office-holders need to take the whole community on board before making such decisions,” he said, announcing that he will not act on the pamphlet.

“It’s up to our customers; whether they ask for a clean shave, trimming, French or other cuts, we will fulfil the demand.”