Kashmir to be discussed in PM's Saudi visit 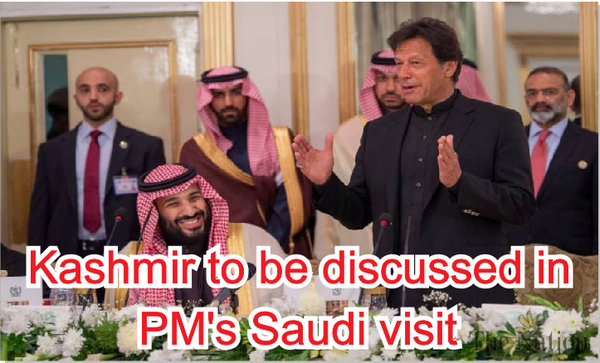 Prime Minister Imran Khan left on a two-day visit to Saudi Arabia today. This marks the fourth of a prime ministerial delegation to the Kingdom of Saudi Arabia.  PM Khan and the Saudi leadership are expected to discuss "the various dimensions of the grave situation in Indian Occupied Jammu and Kashmir, arising from India’s illegal and unilateral actions of 5 August 2019", as per a statement from the Prime Minister's office.

"The Prime Minister has been in regular contact on the Kashmir issue with His Royal Highness Crown Prince Mohammed bin Salman," it read, adding that since the last visit of Mohammed bin Salman in February, earlier this year, "there is a growing momentum in Pakistan-Saudi Arabia relations in all areas of cooperation".

The premier was also expected to discuss with the Kingdom's rulers "ways of further strengthening the economic partnership between Pakistan and Saudi Arabia". It was also hoped that the brotherly relations between the two countries be reinforced, and "bilateral cooperation in diverse fields" is achieved.

Although PM Khan has traditionally attempted to be the bridge between the fraught relations of Saudi Arabia and Iran, no mention has been made of the current crisis in the Middle East. The American government has termed the strike against Saudi oil facilities to be an 'act of war', attributing blame to the Iranian government.