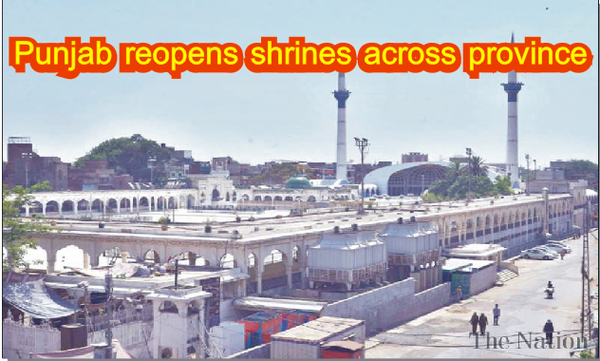 LAHORE - Punjab Cabinet Committee on law and order on Wednesday decided to reopen shrines managed by the Auqaf Department across the province with SOPs decided by the Health Department. The decision was taken at a meeting of the Cabinet Committee at the Civil Secretariat chaired by the Provincial Minister for Law and Social Welfare Raja Basharat.

All shrines including Data Darbar in Lahore and Baba Farid at Pakpattan will be reopened for devotees from Thursday (Today). Concerned authorities of Auqaf department have been directed to ensure implementation of SoPs at the shrines. The meeting also reviewed in detail the reports of possible acts of terrorism received by the intelligence agencies including Corona SOPs and security arrangements on the occasion of Jumat-ul-Wida, Shab-e-Qadr, Yom-ul-Quds and Eid-ul-Fitr.

Participating in the briefing through video link, the divisional commissioners and police officers from outside Lahore apprised that effective plans had been formulated for security and implementation of SOPs of Lockdown. The minister said that before Eid, especially on Chand Raat, street crimes at public places and residential areas should be closely monitored and all federal and provincial law enforcing agencies should liaise closely to thwart possible sabotage attempts.