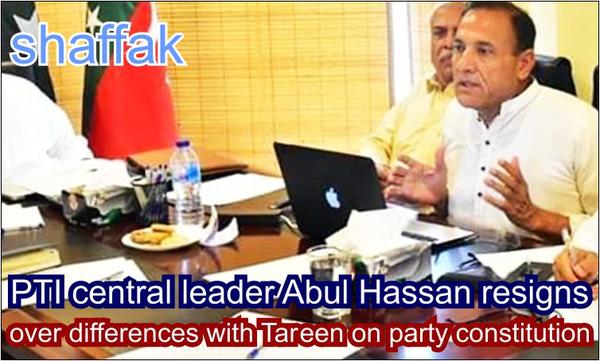 Hassan is the author of the PTI party constitution 2019 and party sources told reporter that he was being forced by Tareen to amend the constitution as per his recommendations. The two also had multiple verbal spats during party meetings.

Hassan submitted his resignation to PTI Chief Organiser Saifullah Niazi, party sources said, adding that no decision has been taken on the resignation as PTI chief Prime Minister Imran Khan has told the party's top brass that he will take up the matter after his return from China.

"In view of the controversy created in the party leadership in the wake of Constitution Review Committee meeting, I feel it appropriate to tender my resignation from the post of Additional Secretary General to pave the way for somebody more suitable for the changing environment," read the resignation letter, the text of which was seen by DawnNewsTV.

"I would like to thank you and all the colleagues in the central governing body for the utmost respect and cooperation," the brief letter sent to the chief organiser read.