Rabi Pirzada: Those who spread videos will be apprehended 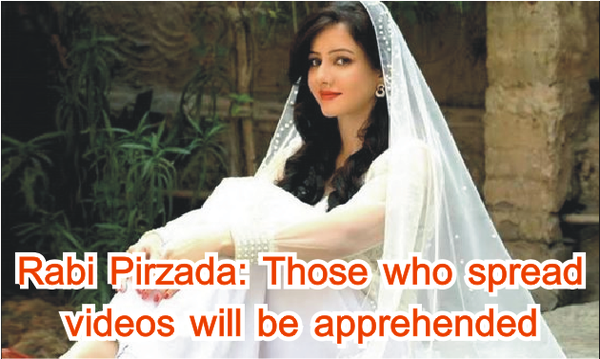 The former singer and actor Rabi Pirzada reaffirmed her commitment to quit the entertainment industry in a video statement released on Thursday. The first public appearance Pirzada has given since her private videos leaking on the internet, Pirzada said that her decision to leave the industry has been determined by her need to fulfill her religious obligations. She apologized to her fans, and quoted many religious messages in her statement, saying she had found her "true calling" in religion. "A lot of women also offered to support and protect me, assuring me that no one would be able to raise a finger against me. These included those affiliated with #MeToo and #MeraJismMeriMarzi," she said in the statement, referring to the many people, including singer Meesha Shafi, who had expressed solidarity with her after leaked videos went viral.

"My mistakes are between myself and my Creator, the One who knows what is in the hearts of the people. He is the All-Forgiving and the Most Merciful," she stressed.  "That is when I realised that whenever a woman is dragged into the public debate, so many things go wrong," she said. "I think I have been given a new life, and the meaning of my life is now only religion," she affirmed.  Pirzada also said that those who proliferated her videos will be apprehended, as the Federal Investigative Agency (FIA) continues to pursue her case. According to Pakistan's laws, the sharing of personal videos and photographs without the owner's consent is a criminal act. Many social media accounts that shared Pirzada's videos have since deleted their posts, fearing arrest by the FIA.