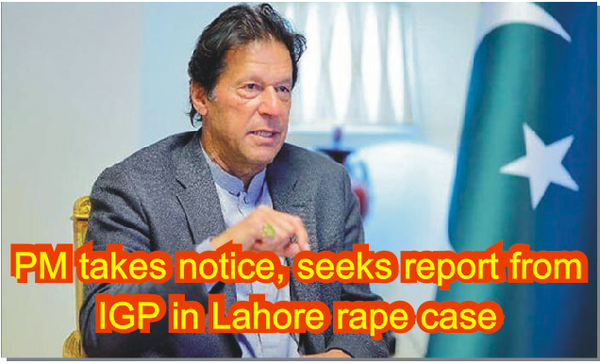 ISLAMABAD - Prime Minister Imran Khan on Thursday directed a strict action against culprits involved in the rape of a girl child and a woman, saying such incidents were a blot on the society. Taking notice of the incidents, the prime minister asked the inspectors general of police to submit investigation reports. Prime Minister Imran Khan said protection of women was the responsibility and priority of the government, and warned that such horrific acts could not be allowed in a society. He directed immediate and strong action against the culprits. He stressed making the laws more effective to end incidents of rape of innocent children and women. Meanwhile, Minister for Information and Broadcasting Senator Shibli Faraz on Thursday strongly condemned the tragic incident of the rape of a woman while traveling on the motorway. He said that evil characters who committed the heinous act will not escape from of the law. The Minister said that these beasts will be punished as per the law.  He said the government would ensure that justice is provided to the victim.