'Repression of people under occupation gravest form of terrorism': Pakistan responds to India at UNGA 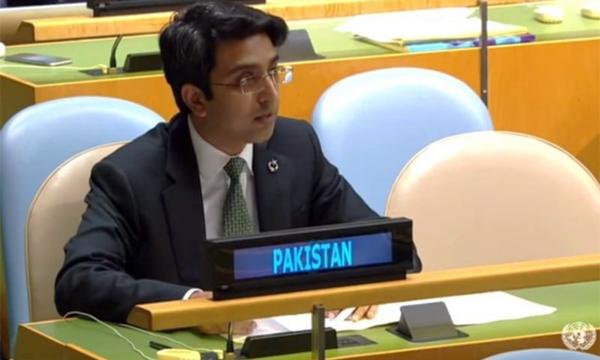 Pakistan, in a strongly worded rebuke to the Indian response following Prime Minister Imran Khan's speech at the United Nations General Assembly, called out the Indian government for its continued repression of people in occupied Jammu and Kashmir, which it said "amounts to the gravest form of terrorism".

"May I remind the Indian delegation of the position of 120 members of the non-aligned movement that repression of the people under occupation amounted to the gravest form of terrorism and should be denounced as such," said Zulqarnain Chheena, representing Pakistan at the forum, on Saturday.

"It is obvious that India neither wants to face up to the truth about its abominable policies and actions nor does it want others to see it.

"It is strange that a country that has been engaged in the state's terrorism in occupied Jammu and Kashmir for over 30 years has the temerity to accuse others of terrorism," said Cheena.

Earlier on Saturday, India had responded to the prime minister's UNGA address, by accusing Pakistan of "building an industry of terrorism from the ideology of hate".

In today's rebuttal to the Indian statement, the Pakistan representative said such statements were "rather rich" coming from a country whose "serving naval officer commander Kulbhushan Jadhav was caught red-handed for espionage, sabotage and terrorism". He questioned how such a country could "have the gumption to term the victim as the perpetrator".

"A country which is in the iron grip of the fascist RSS, which was thrice banned in India for terror-related charges, has the audacity to point fingers towards others," he added.

In the statement by the Indian representative yesterday, accusations were also hurled at Pakistan about its treatment of minorities.

Pakistan, in its response today, reminded the forum that India, instead of directing its questions at Pakistan, should "seek answers from the perpetrators of the Samjhota terrorist attack who were acquitted earlier this year".

"India should seek answers from the killers of Pehlu Khan who was killed in cold blood for transporting cattle by a violent cow vigilante mob in 2017," said Chheena, reading out the response.

"India should seek answers from the masterminds of the Gujrat pogram in 2002 whose political fortunes have bloomed while the innocent victims flinch in pain and misery."

The Pakistan representative told the forum that "the common threat behind these and countless other incidents is that the victim has had the misfortune of finding himself against the might of the all-encompassing Hindutva onslaught".

Pakistan also called attention to the fact that India, despite touting claims that it had "removed an outdated and temporary provision" (Article 370 of its constitution), and proclaiming its "millenia-old heritage of diversity, pluralism and tolerance", had failed to include even a cursory mention of the plight of the people of occupied Kashmir.

"The Indian representative deliberately did not mention the complete and cruel communications blackout in the occupied territory. Neither did she mention the plight of the innocent Kashmiris who have been forced to live for the last 53 days without essential food or supplies. 53 days without the information of the well-being of family and friends. 53 days of total darkness and a biding fear of the unknown with no end in sight.

Pakistan questioned such a "novel model" where the stakeholders to the so-called development are locked up.

"If indeed, the actions taken are so well-meaning to the people of Jammu and Kashmir, I ask the Indian representative: Why does the Indian state not allow the Kashmiri people to come out and express their feeling? Why is India so afraid?" asked the Pakistan representative.

"Does India have the moral courage to respond to the findings of the United Nations Office of the High Commission of Human Rights (UNOHCHR) reports on occupied Jammu and Kashmir that have documented a litany of barbaric Indian oppression in the occupied territory?" he further inquired.

"If not, the creaking Indian defense is nothing but a self-perpetuating farce.

"The central reality of all this, Mr President, is the dire human rights and humanitarian situation in occupied Jammu and Kashmir and the denial of the fundamental right of self determination pledged to Kashmiris by India, Pakistan and the international community as enshrined in the 11 Security Council resolutions," he concluded.