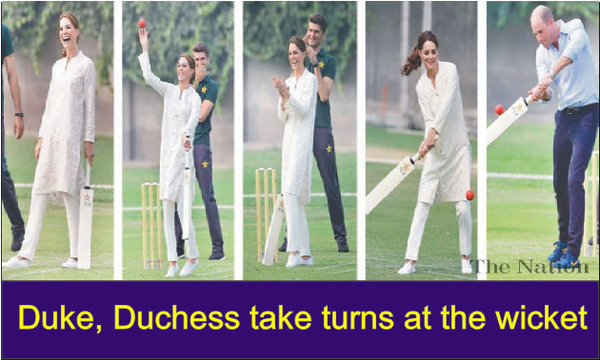 Lahore - In their first-ever visit to the home of Pakistan cricket by any British royal, the Duke and Duchess of Cambridge visited the Pakistan Cricket Board’s state-of-the-art National Cricket Academy. To enjoy Pakistan’s most popular sport they participated in a match with children from the British Council’s DOSTI programme.DOSTI aims at promoting sports as an integral part of children’s development by encouraging social integration, increased self-esteem. The Duke and Duchess also had the opportunity of meeting Pakistani cricketing icons Waqar Younis, Hasan Ali, Sana Mir and others at this event. The royal couple was received by PCB Chairman Ehsan Mani and Chief Executive Wasim Khan. They spent around 60 minutes at the venue, which has a proud history of producing some of the modern-day stars of cricket. Yes, we do like Pakistan. It is a really beautiful and vibrant country

According to news reports, William and Kate both took turns hitting some soft balls in the game. There were cheers as the Duke hit a six, while Kate was caught out twice after half a dozen balls - but they were deliberately dropped by the catchers. After both taking a turn at the wicket, the couple high-fived the boys and girls they were playing with. The Duke and Duchess both admitted they could improve their cricket.

Kate, meanwhile was caught out twice - but locals remained impressed with her enthusiastic efforts to hit the ball. She had sensibly swapped her heels for a white pair of trainers.To make matters more challenging, female cricket stars Sana Mir and Ayesha Zafar were bowling. The two teams had a mix of boys and girls from underprivileged backgrounds aged between 10 to 14 years. Waqar Younis - former captain of the Pakistan cricket team - was umpiring and was excited to see the couple as he had already met the Queen twice. He said: “I’m glad that they came - it was a great encouragement for these young kids.”

On their skills, he joked: “They probably need some homework! William told me he has played a lot of tennis - and that he really only played cricket when he was younger. But he said he can work on it!” He said that the couple hadn’t seemed nervous about their performance, saying: “I was more tense than he was!” Upon arrival, William appeared to be feeling the 86F (30C) heat and remarked to the children he was introduced to: “Is it warm for cricket today?”

Fizza Abid, a cricket coach and manager of the women’s cricket team, said: “The couple seemed really happy to be there and asked what other sports the children liked. Kate asked how much sports helps these young people and we told her how much it helps.’

Adeeba, 14, asked the Duchess if she liked cricket. Abid, who was helping to translate, said: “The Duchess said she liked cricket - but is into tennis and swimming. She said she needs to practise cricket more.” “They were also asked if they liked Pakistan and said yes they do, that it was a really beautiful and vibrant country.” PCB Chairman Ehsan Mani, in his speech, said: “Your Royal Highnesses, on behalf of all the young girls and boys, and the Pakistan Cricket Board, I would like to thank you for joining us here at the National Cricket Academy.”

“This is a very special day for the children who have got the opportunity to meet and play with you. This is something they will never forget. I thank you for this wonderful gesture,” he said. “We are grateful to the British Council for this Dosti initiative, which has been so well supported by the British High Commission, and we are delighted that the Pakistan Cricket Board is a part of it.”