“I was a big fan of my mother” 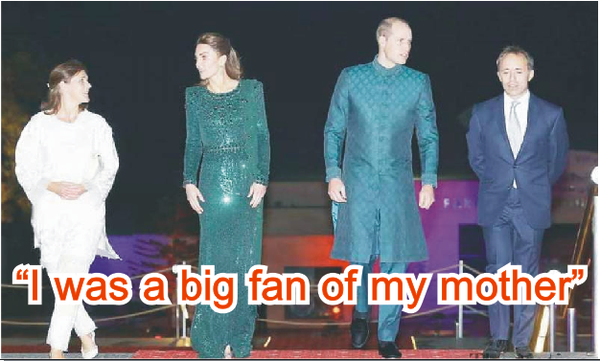 ISLAMABAD    -   British Prince William yesterday recalled his love for his mother Diana when a student told him she was a big fan of the late princess. William poignantly recalled his love for his mother after meeting with school kids. The prince, who is second in line to the throne after his father Prince Charles, visited Islamabad Model College for Girls, where they bonded with a group of teenagers over their shared admiration for Princess Diana. During the visit, 14-year-old Aima told William and Kate Middleton they were “big fans” of the Prince’s late mother. William smiled and replied: “You were, really? Oh, that’s very sweet of you. I was a big fan of my mother too.” “She came here three times. I was very small,” he continued, speaking of Diana’s visits to Pakistan in the 1990s. “This is my first time, and it is very nice to be here and meet you all.” For the outing, Kate made sure to embrace Pakistan’s culture and style by wearing a royal blue shalwar kameez, the country’s national dress and a dupatta by Pakistani designer Maheen Khan. She completed the look with a pair of beige shoes. William meanwhile, kept it traditional in a light blue button-down shirt, black pants, and black shoes.

While at the school, William and Kate toured classrooms of children between the ages of 4 and 18 and highlighted the benefits of young girls pursuing higher education and professional careers. The royals beamed as they entered the school side-by-side before greeting teachers and meeting with a classroom full of kindergarteners, whom they sweetly introduced themselves to and interacted with. Aima, who hopes to be a brain surgeon someday, also asked the future king what he wanted to be when he grew up. “Actually I changed a lot as I got older, but I always wanted to learn to fly. I was flying for a while actually,” he replied. “I love flying, I feel very free and I like learning a skill, I enjoy that. I can relate the science of what you do.”

William and Kate even sat down at the tiny tables where the students were sitting to shake their hands and chat with the little boys and girls. From there, the couple immersed themselves in all the school had to offer, including a program called “Teach for Pakistan”, which is helping to recruit and encourage graduates and professionals from various fields to become teachers. Focusing on schools in disadvantaged areas, the program aims to reduce inequality in education. “Access to quality education, particularly to girls and young women is one of the UK’s top priorities in Pakistan,” the couple’s spokesperson said ahead of the royal tour. Area education officer Mohammed Sohail Khan also echoed those sentiments, noting that the quality of education, particularly for girls, varied across the country.

“In recent years there has been gradual progress in understanding how important education is for girls and young women. There is a realization of what it can mean in terms of jobs and prospects,” he said. He added: “I can’t paint you an entirely rosy picture. It does still fluctuate wildly, particularly in rural regions, where there has traditionally been cultural barriers towards this, notably in terms of sending girls away to college. But these barriers are slowly being broken down.” The outing was the royal couple’s first opportunity to meet “young Pakistanis, and hear more about their aspirations for the future,” which is one of the couple’s hopes for their tour of the country, the spokesperson said.

The couple followed their tour of the school in Islamabad with a visit to a school in Margalla Hills. They joined children from three schools as they took on various activities, including setting a leopard camera trap and a project to help identify and remove harmful plants that are threatening the environment. The couple are the first royals to officially visit the Commonwealth country since the Prince of Wales and Duchess of Cornwall visited the region in 2006. As they left the Islamabad Model College for Girls, Prince William said to a teacher: “In the UK we’re trying to make sure mental health is part of education as well.” He said students from disadvantaged backgrounds did not have a “stable health platform to build on” and that education in this area was important.

When asked by some of the school children if they were enjoying the tour, Kate replied, “It’s fantastic. This is only day one for us. We are going to the north so we will be interested to explore and see the difference.” The royal couple regularly campaign about mental health awareness, alongside the Duke and Duchess of Sussex. Last week the Every Mind Matters website crashed following the foursome’s appearance in a film to promote its initiative. A British High Commission statement said the royal couple began their tour of Pakistan with a day of education, conservation and official engagements in Islamabad. “To begin the day TRH visited the local, government-run Islamabad Model College for Girls school to champion the importance of quality education, particularly for girls.  The school educates students between the ages of 4 and 18.

TRH met pupils from kindergarten to sixth form and heard about how the students are benefiting from Teach for Pakistan, a fast-track teacher training programme modelled on the UK’s successful ‘Teach First’ scheme. Like Teach First, Teach for Pakistan is focused on improving the quality of teaching in schools which serve families from disadvantaged backgrounds through a rigorous teacher selection and training programme,” said the statement. Continuing the education theme, they then visited the Margalla Hills to take part in a number of activities which highlighted Pakistan’s work to meet several of the Sustainable Development Goals. “Their Royal Highnesses joined children from four local schools to set up a leopard camera trap. Environmental change and its impact is an increasingly serious issue in Pakistan, a country especially vulnerable to climate change. The Margalla Hills in particular face threats of encroachment, poaching, wildfires, invasive species and littering,” the statement added.