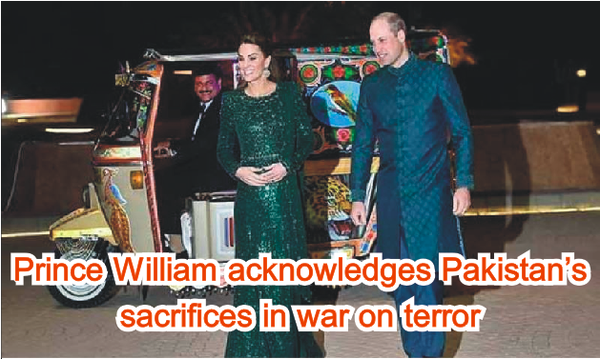 Duke of Cambridge, Prince William paid tributes to all those who endured sacrifice and helped build Pakistan. His remarks came during a reception at the Pakistan National Monument in Islamabad hosted by the British High Commissioner to Pakistan Thomas Drew. During his keynote speech, Prince William referred to his grandmother’s, Queen Elizabeth II, visit to Pakistan more than fifty years ago and said, “Stood here with this magnificent monument behind me, I am struck by the great strides Pakistan has made since its birth seventy-two years ago,” Daily Mail quoted. He said for a country so young, Pakistan has endured many hardships, with countless lives lost to terror and hatred.

Prince William also spoke of the unique bonds between the two countries and that Pakistan can rely on the United Kingdom to keep playing an important role as a key partner and a friend. The Royal guest also called for a concerted effort between both countries to surmount the challenge of climate change. Earlier, Duke and Duchess of Cambridge, Prince William and Kate Middleton arrived at the venue in style in a rickshaw decked out in traditional truck art. Director-General Inter-Services Public Relations Maj Gen Asif Ghafoor, Air Chief Marshal Mujahid Anwar Khan, Wasim Akram and wife Shaniera Akram, cricketer Mohammad Hafeez, actresses Mahira Khan, Hareem Farooq and Mehwish Hayat, and singer Atif Aslam also attended the reception.