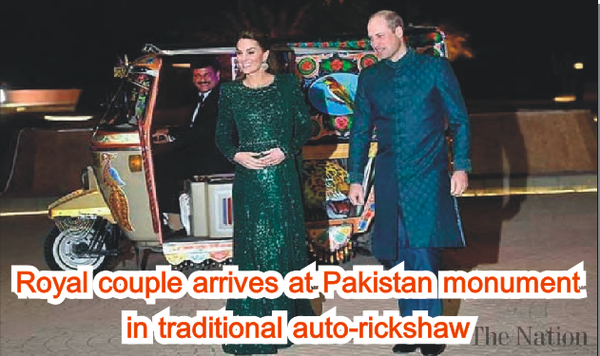 Prince William and Kate Middleton, the Duke and Duchess of Cambridge, arrived on Tuesday evening at a receiption being held at the Pakistan National Monument in Islamabad by a traditional auto-rickshaw. According to details, William was seen in wearing traditional attire, a sherwani, for the first time since his arrivale while Kate wore a green gown.

A receiption was given in the honour of the Duke and Duchess of Cambridge and Prime Minister Advisor for Media Firdous Ashaq Awan was also present on the occasion.

After that, British royal couple arrived at the Model College for Girls in Islamabad. The Duke and Duchess of Cambridge’s maiden trip is to Pakistan ais to boost bilateral ties and address challenges such as climate change and women’s education. The coupl intreacted with the students and teachers and posed for photographs. On arrival at the school, a securty guard presented saulat to the royal couple and they greeted the guard with shackhand. The royal couple then headed to Margalla Hills for an even to highlight the impact of global warming.

It is pretinent to mention here that the royal coupl’s visit to Pakistan is the centre of attention of the international media as well and their visit will help Prime Minister Imran Khan’s efforts to enhance soft image of the country in the world. British newspaper The Daily Mail writes that Prince William has special sentiments with Pakistan due to his mother’s special attachment with Pakistan. The couple visit will help improving bilateral ties between UK and Pakistan