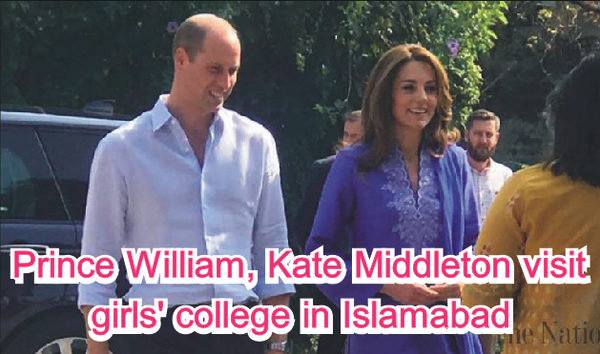 The Duke and Duchess of Cambridge embarked on the first full day of their tour of Pakistan on Tuesday by visiting the Islamabad Model College for Girls. The Model College for Girls is a government-run school for disadvantaged from four to 18-year-olds, benefiting from the Teach for Pakistan programme based on the UK’s Teach First scheme Kate arrived at the college dressed in a royal blue classic kurta with trousers and dupatta by Pakistani designer Maheen Khan. Later in the day Prince Willaim and Kate Middleton will visit the Margalla Hills in the foothills of the Himalayas.

The Duke and Duchess will also meet President Arif Alvi and Prime Minister Imran Khan and later attend a reception hosted by British High Commissioner Thomas Drew. Prince William and Kate arrived in Pakistan late Monday evening on a five-day visit to the country. The royal couple touched down at the Pakistan Air Force's (PAF) Nur Khan Airbase in Rawalpindi, near Islamabad, as Foreign Minister Shah Mehmood Qureshi, British High Commissioner to Pakistan Thomas Drew, officials from the Foreign Office, and top government officials cordially received them at the red carpet. A guard of honour was presented to Prince William and Kate Middleton as they reached Pakistan. The royal couple will visit along with their three children on an official tour, which is expected to repair Pakistan’s international image a great deal.

The trip was the first of its kind undertaken by any member of the British royal family to Pakistan in 13 years. The Royal couple will travel to Lahore on October 16 whereupon they would tour SOS Children's Village, Aitchison College, Shaukat Khanum Memorial Cancer Hospital & Research Centre, Badshahi Mosque, Minar-e-Pakistan, and National Cricket Academy. Then, on Friday, their last day of the five-day visit, the royal couple are set to visit the Faisal Mosque before their departure in the afternoon. Over the course of the visit, Prince William and wife Kate Middleton will meet a wide variety of people, including children and young people, leaders from government, business and the charity sector, inspiring conservationists, and well-known cultural figures and sporting stars.