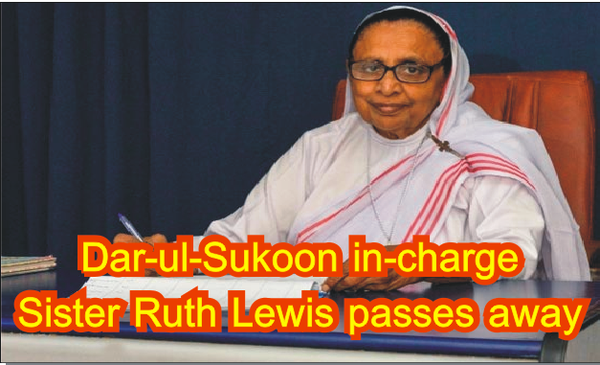 Dar-ul-Sukoon in-charge Sister Ruth Lewis on Tuesday has succumbed to coronavirus. Ruth Lewis, who served Dar-ul-Sukoon for fifty years, was tested positive for COVID-19 on July 8. Sindh Chief Minister Syed Murad Ali Shah and others expressed grief over her demise.

Sindh government spokesperson Senator Murtaza Wahab confirmed the news of passing away of Sister Ruth Lewis. Her selfless contributions to our society will always be remembered and cherished, he said. Inspired by the Dutch founder of the charity, Sister Gertrude Lemmens, Lewis joined the organisation almost two decades back.

A Roman Catholic nun, Lewis also received the Pride of Karachi Award over her contributions to the society and particularly the vulnerable in the society.  The charity's administration said that Lewis got infected in July 8, adding that she was under-treatment at a private hospital.

The officials confirmed that Sister Lewis passed away on Monday night. She was among the founding members of the charity house and served there for more than 50 years. The administration added that 21 children at Dar-ul-Sukoon have been infected with the coronavirus and have been put under quarantine, officials confirmed.  Lewis contracted the virus while looking after these children, revealed the officials.