The giant in the field of journalism 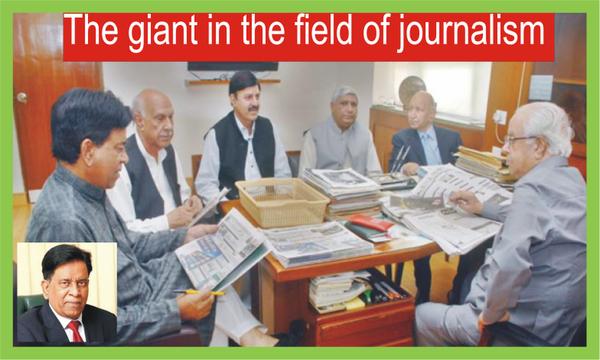 I was in seventh grade when I read my first book in English language. The book was Gulliver’s Travels. The story was about a person who lands up in Lilliput where the height of people was not very tall. To them Gulliver was a giant who could do wonderful things and protect them from their enemies. Among the dwarfs he was looked up at with admiration.

In my wisdom naming Majid Nizami as Gulliver in the field of journalism would not be inappropriate. It does not mean that there are not other towering personalities in journalism. For example journalism has produced true sons of soil like Maulana Zafar Ali Khan and Hameed Nizami. We could name other personalities here too but the purpose is to mention the special qualities of Majid Nizami and the way he led Nawa-i-Waqt as an institution. He took the newspaper to new heights by his untiring and great efforts. His contributions in the field of journalism are appreciated not only by his friends but his enemies too praise his work. Throughout my four decades of career in journalism I have observed the personality of Majid Nizami from a distance. But I was always convinced about his great journalistic values, behaviour and journalistic achievements and without directly seeking knowledge from him always considered him my teacher.

I started my journalism in 1973 as sub editor in Asar Chohan’s newspaper daily ‘Siasat’. Even today I consider Asar Chohan as my first te­acher in journalism. In those days, we heard about Nizami Sahib’s passion and commitment to true spirit of journalim. Honestly speaking we always had a wish to be like Majid Nizami. I also received various successes in my life. I became editor of a leading newspaper ‘The Sun’ at the age of 27. It was not a usual thing but whenever I met Majid Nizami Sahib the wish was always there to be with him and learn from him.

But in contrast to that wish I joined the country’s second largest media group’s English newspaper ‘The News’ which was started on February 7, 1991.

I still don’t remember the reason behind Majid Nizami’s kind behaviour towards me. The loving behaviour of Majid Nizami continued till last days of his life. I have this privilege that being editor of ‘Muslim’ and ‘The News, I have traveled abroad with Majid Nizami. His way of talking with foreign leaders was impressive and inspiring as well. Especially the way he dealt with dictators was quite appreciable and due to this unique style, his institution Nawa-i-Waqt newspapers and its magazines faced government’s ban on advertisements but he never compromised on principles.

It was November 2, 2011 that I could join Nizami Sahib’s institution as Editor of The Nation. I feel privileged of having worked with Nizami Sahib for over five years. I am also proud of working with Nizami Sahib’s daughter Ms Rameeza Majid Nizami, who is flag-bearer of huge journalistic standards and is carrying forward all values that were so dear to late Majid Nizami.

Late Ziaul Haq once invited Majid Nizami on a visit to India to which Nizami Sahib replied, “I am ready to go to India but take me there on a tank.”

In a function Prime Minister Nawaz Sharif asked Majid Nizami whether to conduct nuclear blasts or not. “Mian Sahab dhamaka kar do warna awam nay twahada dhamaka kar dena, (Mian Sahib go by the public aspirations on conducting the atomic tests otherwise the nation would blast you), replied Nizami Sahib in his address on the occasion.

Similarly he was heir to the ideology of Pakistan and he never compromised on his stance of two nation theory. He was of the view that having friendship with India was against the two nation theory of Quaid-e-Azam Muhammad Ali Jinnah. Majid Nizami had the credit of building an institution like Nazaria-i-Pakistan Trust. Other than this, he contributed a lot in building of journalistic institutions like All Pakistan Newspapers Society and Council of Pakistan Newspapers’ Editors.

Nawa-i-Waqt as an institution faced very bleak situations but he turned the wheel of history for this media house with his endless effort, passion, and honesty. It was with his efforts that daily Nawa-i-Waqt became country’s most trustworthy newspaper. Nawa-i-Waqt’s sister organization English newspaper ‘The Nation’, children’s magazine Phool, weekly magazine ‘Family’ and Nidai-e-Millat all are testimony to the high journalistic values.