´Same old´ Smith out cheaply in first innings since concussion 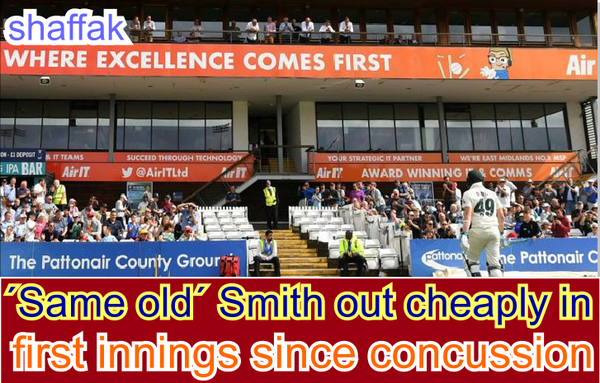 DERBY, United Kingdom: Australia star Steve Smith headed straight back into the nets after he was out for just 23 in his first innings since being felled by England fast bowler Jofra Archer and suffering concussion in the second Ashes Test.

Smith took to the crease in the three-day tour game at Derby on Friday, coming in with Australia 179-2.

His 38-ball knock ended when he sliced a drive off Matt Critchley, a leg-spinner whose previous 59 first-class wickets had come at an expensive average of 51.86, to Hamidullah Qadri, running in from the cover boundary.

Smith, who was in the middle for 47 minutes, struck two fours.

But the only five deliveries he faced that weren´t from a slow bowler came from medium-pacer Anuj Dal.

"It´s always nice to bat with ´Smudger´ (Smith)," said all-rounder Mitchell Marsh -- in the middle for the whole of Smith´s innings.

"I´m sure he had a bit of fun out there. He´s the best player in the world so it´s always nice to have him back," added Marsh, yet to feature in this Ashes.

"He was just the same old ´Smudger´."

Smith kept his pads on following hs exit and was soon back in the nets.

Australia opener David Warner -- not playing against Derbyshire -- used the ´dog-thrower´ device to simulate fast bowling as he sent down deliveries to Smith, renowned for his obsessive training regime.

"That´s just him, that´s what he does and that´s why he´s the best in the world."

Meanwhile Critchley, asked about the ´secret´ to dismissing Smith, replied: "Bowl a half-volley outside off stump!"

Smith´s brief innings came on the same day as England great James Anderson was ruled out of the rest of the Ashes with a calf injury.

Anderson, England´s all-time leading wicket-taker, has not bowled in the series since breaking down with the injury after delivering just four overs in the first Test at Edgbaston.

This was former Australia captain Smith´s first match since being hit on his unprotected neck by a 92 mph bouncer from Archer during the drawn second Test at Lord´s.