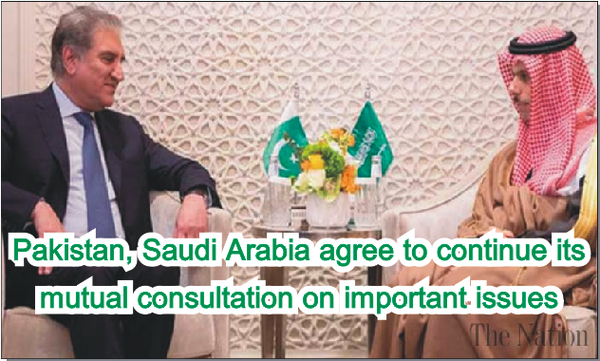 The Foreign Minister inquired about the health of King Salman bin Abdulaziz of Saudi Arabia and prayed for speedy recovery of Saudi King after a successful surgery. The Foreign Minister apprised of the effective measures taken by Pakistan to prevent the spread of the Corona epidemic, including Smart Lockdown policy. He said Prime Minister Imran Khan's smart lockdown strategy has not only reduced the spread of pandemic, but also significantly declined the death rate in the country.

The Saudi Foreign Minister said that the Corona situation in Saudi Arabia is also improving. Shah Mehmood Qureshi strongly condemned the recent missile attacks by the militias on Saudi defense installations and expressed solidarity with the Saudi government and people on behalf of the people and government of Pakistan. The two foreign ministers also discussed the forthcoming session of the United Nations General Assembly.