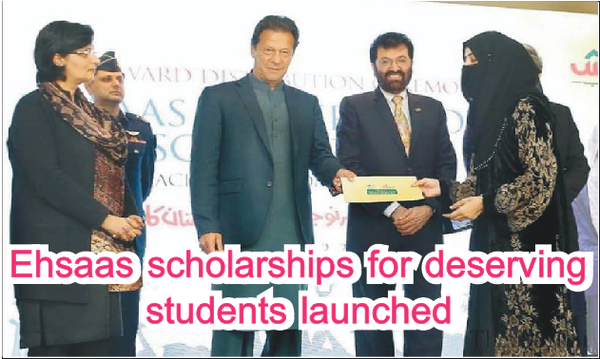 ISLAMABAD - Reiterating that Pakistan’s biggest asset is the country’s youth, Prime Minister Imran Khan has said that granting scholarships on merit to deserving undergraduate students is another step towards the realization of the goal of a welfare state based on the pattern of state of Madina. Addressing the launching ceremony of Ehsaas Undergraduate Scholarship Programme here on Monday, the prime minister said this program complements his roadmap to transform Pakistan on the model of state of Madina. According to a statement issued by the PM media office, the prime minister said in that model, Prophet Muhammad (PBUH) had ensured that it was the state responsibility to care and look after the weaker segments of society.

“How can you identify a civilised society? The identity of a civilised society is not determined by how the rich live, it is determined by how the poor live. This is what draws a distinction between a humane society and one that is animalistic,” he added. Citing the example of Holy Prophet (PBUH), the premier said: “This is what happened in Madina. The state took responsibility for the poor, even though it was weak. They had no means, and no money but they had Ehsaas. “They understood the importance of empowering the poor,” Imran said.

50,000 scholarships to be given to students from 119 public sector universities

Further, the state of Madina also understood the importance of education, he said. “When the Battle of Badr took place, according to the customs at the time, war prisoners would be released for ransom. But the state decided that the prisoners would be released if they teach at least 10 people how to read and write.” “You have to understand how forward thinking this approach was. This was the reason that for the next few centuries, the world’s top scientists were Muslims,” he said. He said that a small portion of our society receives proper education and has access to facilities yet there is a separate education system for the common man which does not allow them to move forward in life.

Appreciating the Ehsaas Undergraduate Scholarship Program, he said the state will increase the number of scholarships as well as the funds of HEC when the financial situation improves. The prime minister expressed hope that the recipients of this scholarship will study with dedication to bring laurels to the country in various fields. He congratulated Dr. Sania Nishtar for launching this program and other schemes under the Ehsaas umbrella. Imran Khan also handed over the scholarship award letters to selected students.Earlier, Special Assistant to Prime Minister on Poverty Alleviation and Social Welfare Dr Sania Nishtar said the scholarships will be awarded on transparency and merit to help the deserving students get education.

She said fifty thousand scholarships will be given each year to the deserving students of 119 public sector universities across the country, including Azad Kashmir and Gilgit Baltistan. A total of two hundred thousand students will benefit from this program. Sania Nishtar said that fifty per cent quota has been fixed in the undergraduate scholarship programme for the women whilst two per cent for the disabled persons. She said the scholarship program covers the tuition fee and four thousand rupees will be given to the students as a monthly stipend. The Special Assistant said that over one hundred and thirty two thousand students have applied for the scholarship.