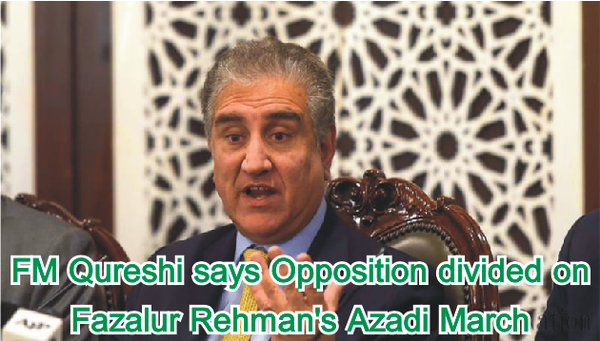 Foreign Minister Shah Mehmood Qureshi has said opposition parties are divided on Jamiat Ulema-e-Islam-Fazl’s (JUI-F) march and sit-in in Islamabad by the end of this month. Speaking to media after performing ground-breaking of various uplift projects in NA-156 constituency in Shah Rukn-e-Alam area, Qureshi said Pakistan Muslim League-N (PML-N) President Shehbaz Sharif had opposed the march during party’s meeting in Lahore, saying that he [Shehbaz] was not in favour of a sit-in.

The foreign minister said Shehbaz also disliked Captain (retired) Muhammad Safdar statement about the march. “A meeting between Nawaz Sharif and Shehbaz Sharif has not taken place on the JUI-F march so far,” adding that differences had also appeared in the Pakistan Peoples Party (PPP) ranks about the march.

Qureshi also questioned Bilawal’s statement about PPP’s support for the JUI-F march by welcoming marchers in various cities. “On whose instructions is Bilawal Bhutto favouring a sit-in whereas he had termed it against democracy in the past? Was it not an attempt to derail democracy now,” he asked. He added Pakistan Tehreek-e-Insaf (PTI) had staged a peaceful sit-in for reforms in electioneering process in the past. Responding to a question, Qureshi said JUI-F was going to launch a protest on October 27 while the day is observed as a black day across the world to express solidarity with Kashmiris of the occupied valley.

“The PTI government has also directed its missions in various countries to show the real face of India to the world,” Qureshi said. Responding to a question about the tensions between Iran and Saudi Arabia, Qureshi said Pakistan’s enjoys a cordial relationship with both the countries. “Saudi Arabia was our strategic partner whereas Iran is our friendly neighbouring country. Pakistan will play its role to resolve the issue between the two countries by negotiations because the region does not afford conflicts," he said. He added Prime Minister Imran Khan would travel to Saudi Arabia and Iran to pacify the situation by holding talks.