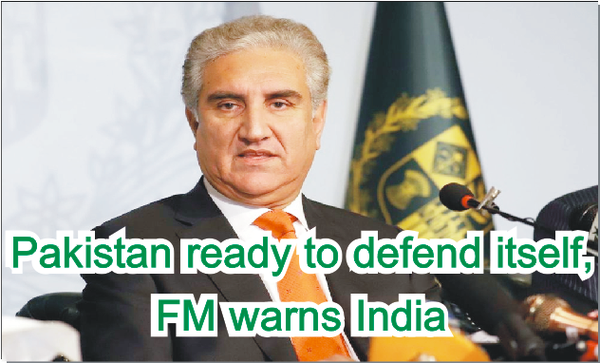 ISLAMABAD - Pakistan yesterday warned India that Pakistan was not a soft target. Foreign Minister Shah Mehmood Qureshi said India will be given a befitting response in case of any misadventure. “India believes that Pakistan will withdraw its support to Kashmiris due to its threats, it is mistaken,” he said in a statement.

He said India should not remain under any doubt and made it clear that the armed forces and the nation were always ready to defend the motherland. “Pakistan will give an immediate befitting response to India if it carries out any misadventure against it. Pakistan is quite capable to defend itself. We are not a soft target,” he said.

He said India’s continuous ceasefire violations on the Line of Control were part of its planned strategy aimed at diverting people’s attention from its failures. The FM said Pakistan wanted resolution of the Kashmir issue and it will continue raising voice over India’s barbarism against Kashmiris. He said Pakistan holds a principled stance and the international environment supports Pakistan’s stance.

Qureshi said the resolutions of the UN Security Council and the Organisation of Islamic Cooperation strengthen Pakistan’s principled stance on Kashmir. The Foreign Minister said Pakistan desired peace and stability in the region, and it was focused to take forward the Afghan peace process.

He highlighted that the people of Indian Occupied Jammu and Kashmir continued to face inhuman lockdown, military siege, communication blockade and unprecedented restrictions following India’s illegal and unilateral actions of August 5, 2019. These draconian measures have worsened the human rights and humanitarian situation in held Kashmir, he said.

The FM called upon the international community to take cognizance of the situation and play an active role in resolving the outstanding disputes of Palestine and Kashmir, in accordance with international law, the relevant UN Resolutions, and aspirations of these two peoples. Separately, speaking to journalists here, FM Qureshi said the nation has to fight the coronavirus pandemic jointly.

He underscored that without immediate, coordinated and comprehensive actions to create fiscal space, the developing world might have to contend with dire social, political and economic consequences. He mentioned the demonization of Indian Muslims in the context of COVID-19 and also the growing Islamophobia.