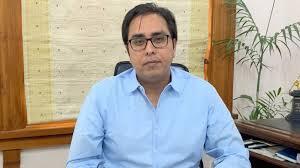 In a sudden turn of events, Dr Shahbaz Gill on Friday tendered his resignation as the spokesperson for Punjab Chief Minister Usman Buzdar.

“I hereby resign from the post of official spokesperson to CM Punjab,” Gill stated in a note of resignation addressed to the chief minister, a copy of which is available with DawnNewsTV.

The news comes after Gill tweeted on Friday afternoon that he had taken an "important decision" in the morning today. "Will share with you soon," he wrote.

The name of the person who will replace him has not been announced as yet.

Among other changes in the Punjab cabinet announced today, Awn Chaudhry was removed as an advisor to the Punjab chief minister.

Mehmood shall act as Adviser to Chief Minister Punjab on "Affairs related to Punjab Horticulture Authorities (PHAs) and Tourism", it added.

Separately, Chief Minister Buzdar in a communiqué to the Punjab acting governor advised him to appoint Malik Asad Ali, a member of Punjab Assembly, as a provincial minister.

“In pursuance of Article 132 (1), read with Article 105 (1) of the Constitution of Pakistan, the Governor of Punjab is hereby advised to appoint Malik Asad Ali, member of Provincial Assembly of Punjab (PP-168) [...] as provincial minister,” the letter read.