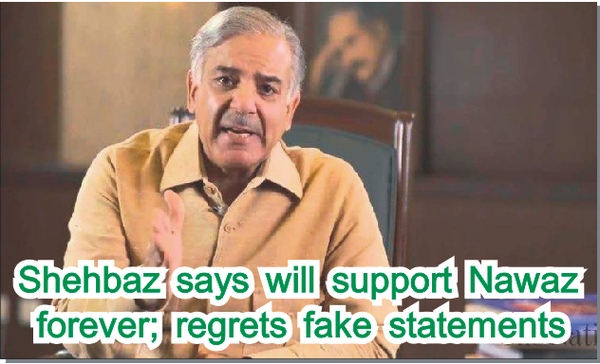 President of Pakistan Muslim League Nawaz (PMl-N) Shehbaz Sharif Saturday said fake statements are being attributed to him regarding differences with former prime minister Nawaz Sharif. The younger Sharif clarified that he will stand with elder brother Nawaz till his last breath. Shehbaz Sharif in a meeting of party leaders held today said that Nawaz has instructed me to participate in Azadi March. He said Nawaz has asked me to contact JUI-F chief.

He asked PML-N delegation to tell JUI-F chief about my health condition. The opposition leader instructed party members to ask Fazlurehman weather the protest would include one day protest or a long sit in. He said Nawaz would be consulted after meeting with JUI-F chief. Meanwhile Shehbaz Sharif contacted Maulana Fazlurehman to discuss the future plan.  Fazl thanked Nawaz Sharif for supporting his Azadi March. A delegation of PML-N would visit JUI-F head on Sunday to apprise him of letter of Nawaz Sharif. Nawaz had asked the party leadership to expedite contacts with Fazlurehman.

Talking to media persons, the PML-N leaders said that they will share a letter from Nawaz Sharif with Jamiat Ulema-e-Islam-F Chief Maulana Fazl-ur-Rehman regarding the decision to join the Azadi March. PML-N senior leader Ahsan Iqbal said that the party leaders will take along Nawaz’s letter to present to Maulana Fazl during the meeting. “Nawaz Sharif has written complete guidelines for the party in the letter,” said Iqbal. Ahsan also said that the party supremo has asked to run a comprehensive campaign against the government to send it packing.

Ahsan also requested media to avoid disinformation regarding party’s stance as only senior party leaders are allowed to give statements. Meanwhile, PML-N Information Secretary Marriyum Aurangzeb has also stated that the rumors of differences between Nawaz Sharif and Shehbaz Sharif are not true. A consultative meeting of Pakistan Muslim League Nawaz (PML-N) was held Saturday to discuss the political situation in the country. Several senior party leaders including Raja Zafar ul Haq, Pervaiz Rashid, Javed Latif and Muhammad Zubair did not attend the meeting. As per details, the party leaders who missed today’s meeting had attended October 9 meeting. Senior leader Pervaiz Rashid confirmed that he was not invited to attend the meeting.