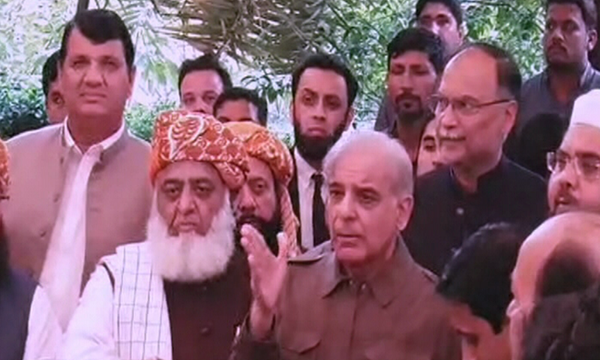 He said that a massive rally will be held in Islamabad on October 31 to present a joint list of demands by the opposition.

"Despite the support that Imran Khan enjoys, he has failed the country and is placing the burden of his failures on the shoulders of our institutions," said Sharif, as he addressed a press conference in Lahore.

"If even the most far gone of governments had received just 25 per cent of the support he has received, then Pakistan would have been soaring high in the skies of progress," he continued.

"From Karachi to Peshawar, the entire nation is in agreement that this government should go home and as soon as possible, fresh elections should take place," said Sharif.

"I have the utmost respect for Maulana [...] we have received instructions for the Azadi March he has set out on, from Mian Nawaz, our quaid, in a letter.

"On October 31, we will ensure our full participation in the march and we will be there in Islamabad to welcome him. We will hold a massive rally to voice our demands and will decide on the next course of action then," said the PML-N president.

Sharif said that it is not just him, but "the whole of Pakistan that stands in agreement with [Fazlur Rehman] over the fact that [under] the selected government and selected prime minister, [the country has witnessed] in the past year, the worst performance in all fields whether it is education or health".

Rehman, taking over the microphone, said that the JUI-F has made its final decision on when to enter the capital city.

"We have decided to enter into Islamabad on October 31 so that nearby caravans and far away caravans can both enter as one."

"I thank all political parties for expressing their complete support for participation in this march. Certainly, when the entire nation enters Islamabad, we will proceed in complete consultation with all opposition parties. All future decisions will be made in joint consultation between the parties."

The JUI-F chief reiterated his party's stance of the incumbent government being "illegally appointed" and "incompetent".

"This can be garnered from their conversations and mannerisms in which on the one hand they can be seen forming committees for negotiations and on the other, they bad-mouth us," said Rehman.

"Criticism, verbal abuse, negotiations and seriousness can never exist together," he added. "If the government is serious, it should hand in a resignation first and then we can hold talks on future action."

"Holding talks before handing in a resignation, in our eyes, holds no meaning," said the JUI-F chief.

Sharif then, took the lead once more, to lay stress on the fact that October 27 will be observed in complete solidarity with Kashmiris. "We will raise our voice for their rights and for their freedom."

He also rejected the "oft-repeated mantra by the government" that the economy was left in dire straights by the PML-N government.

"The economy was in a very healthy state when the PTI government came into power," he insisted.

"I say even today, that if PML-N and the opposition is given the chance to serve the nation, in the wake of results from a fresh election — no matter who comes into power — I promise we will have the economy up and running within six months," claimed Sharif vociferously.

"We will work hard day and night for the elimination of unemployment, poverty and illness the way we did for a dengue outbreak, the way we installed power plants under the leadership of Nawaz Sharif. The way we took Pakistan to new heights, we will do so once more.

"This is our only consideration. This government has destroyed Pakistan and we [have what it takes] to have Pakistan up on its feet once again," declared Sharif.