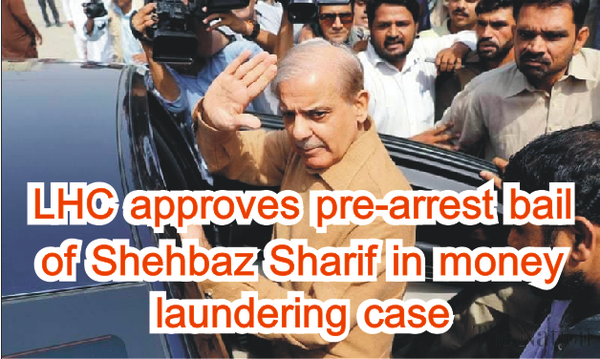 The Lahore High Court on Wednesday granted pre-arrest bail to PML-N President Shehbaz Sharif in the assets beyond means and money laundering case. According to reports, PML-N leaders Shahid Khaqan Abbasi, Ahsan Iqbal, Rana Sanullah, Fazal Chaudhry and Rana Arshad are also present at the court for the hearing. Earlier, authorities had cordoned off roads leading to the court to avoid any mishap.

On June 1, Shehbaz’s legal team had filed a petition before he was required to appear before a combined investigation team of the National Accountability Bureau (NAB). However, the petition could not be fixed for hearing before the division bench, constituted to hear NAB-related pleas, and Shehbaz did not appear before the bureau too.

The PML-N leader added he was also arrested in the same case in 2018 and he had fully cooperated with NAB investigators, however, the anti-graft body did not present any proof against him relating to misuse of powers or money-laundering, etc.

Shehbaz’s lawyer stated that his client had been declaring his assets since he stepped into politics in 1988 and nothing had been concealed ever. He refuted money-laundering allegations, saying the whole story was fabricated and concocted. Shehbaz further stated that he feared that NAB might arrest him in connection with its pending inquiries, which would hinder him from performing his duties as the opposition leader in the National Assembly,