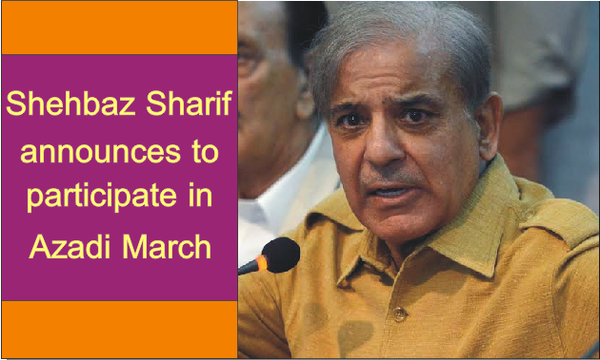 Leader of Opposition in National Assembly and Pakistan Muslim League-Nawaz (PML-N) Shehbaz Sharif on Friday while announcing to participate in the Azadi March said that the government has badly failed to deliver. Talking to media after meeting Jamiat Ulema-e-Islam-Fazl (JUI-F) chief Maulana Fazlur Rehman in Lahore on Friday, he said that demands will be presented during a rally on October 31. The opposition leader said that inflation is rising in the country and the general public is worried about expensive medicines, adding that the businesses have shutdown across the country. Shehbaz went on to say that whatever is happening today is a proof of government’s failure. He said that the government should be sent packing and new elections should be held. Earlier, amid preparations for protest against the incumbent government of Pakistan Tehreek-e-Insaf (PTI), Jamiat Ulema-e-Islam-Fazl (JUI-F) chief Maulana Fazlur Rehman met Pakistan Muslim League-Nawaz (PML-N) president and Opposition Leader in National Assembly (NA) Shehbaz Sharif.

During the meeting, both the leaders discussed plan regarding Azadi march and sit-in in the federal capital, Islamabad. They also deliberated on the facilities for the protesters. Earlier, JUI-F chief Maulana Fazlur Rehman said that there will be no talks with PTI till the resignation of Prime Minister (PM) Imran Khan. He told that the government has not contacted him for negotiation. However, now, the time for talks on Azadi March has also passed, he added. PM Imran Khan had decided to form a committee that will be headed by Defense Minister Pervaiz Khattak for dialogues with JUI-F chairman Maulana Fazlur Rehman. The decision was taken during the meeting of PTI’s core committee.