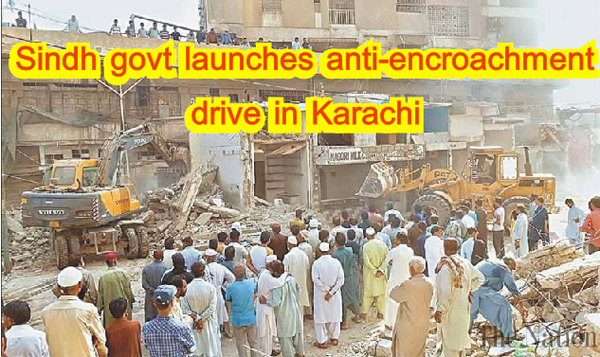 Sindh government on Wednesday has launched a major anti-encroachment drive along drainage nullahs in Karachi. On the first day, illegal constructions including shops and shades constructed near nullahs in Central District will be demolished. The owners of commercial buildings and shops have been directed to vacate the area.

According to deputy commissioner, illegal constructions in Nullah Stop, New Karachi, Cafe Piyala and other surrounding areas would be removed in the first phase of anti-encroachment drive. The grand operation will be supervised by concerned deputy commissioners along with teams of law enforcement agencies while additional officials of the anti-encroachment department were also summoned from other parts of Sindh.

Chief of Army Staff (COAS) General Qamar Javed Bajwa said that the country’s armed forces will not disappoint the people in difficult times and the program for Karachi will have the full support of the Pakistan Army.

As per a statement issued by the Inter-Services Public relations (ISPR), COAS General Qamar Javed Bajwa arrived in Karachi on one-day official visit and was flown over the city for aerial reconnaissance of the impact of urban flooding in Karachi. Earlier, Chief Justice of Pakistan Justice Gulzar Ahmed had expressed anger over administration in a case pertaining to encroachments on drains in Karachi.