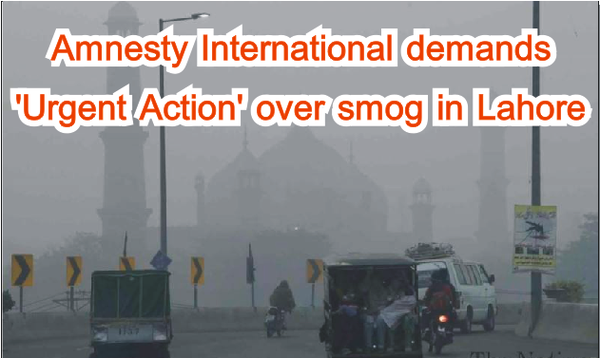 On Friday, Amnesty International issued an "Urgent Action" warning for the people of Lahore to protect themselves from the hazardous smog engulfing the city. “The government’s inadequate response to the smog in Lahore raises significant human rights concerns. The hazardous air is putting everyone’s right to health at risk,” said Rimmel Mohydin, the South Asia campaigner at Amnesty International. She continued: “The issue is so serious that we are calling on our members around the world to write to the Pakistani authorities to tell them to stop downplaying the crisis and take urgent action to protect people’s health and lives.” A mobilizing tool used to exert pressure on governments and states, "Urgent Action" has been previously used by Amnesty International to garner international support for issues like the release of Aasia Bibi.

While Delhi's city administration has taken many measures to reduce smog, including restricting the number of vehicles on roads and shutting down government offices and schools, Lahore has yet to receive any directives from the government to address the crisis. As of yet, the only measure the government has taken is to close schools on days the smog is predicted to be hazardous. Even the wearing of smog-masks to school is not enforced in the city.  Studies have shown that smog can cause a variety of cancers, as well as aggravate the health of those who are prone to lung-related illnesses. Children and the elderly are considered to be the groups most vulnerable to the effects of smog.