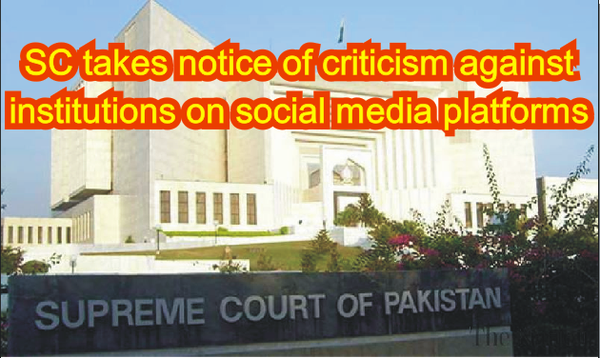 The Supreme Court of Pakistan took notice of objectionable content on social media platforms in the country Wednesday, noting that such forums are rife with content that incite hate against Pakistan’s institutions. The apex court was hearing a case against suspect Shaukat Ali pertaining to a sectarian crime when the topic came under discussion. During the hearing, Justice Qazi Ameen said that the public, through YouTube videos, is being instigated against the Army, judiciary, and the government.

“Was action taken against those who committed this crime?” said the judge, asking further if the Federal Investigation Agency and Pakistan Telecommunications Authority have noticed the content that is being uploaded on YouTube. “On YouTube and social media, even our families are not being spared (from criticism),” said Justice Ameen. “We gave a verdict yesterday and today it was there on YouTube,” said Justice Qazi, adding that everyone acts like an expert on social media.

He continued that the public can speak regarding the judges’ performance and decisions, stating that they do not have an issue with freedom of speech. To this, the PTA officials told that the bench that the authority cannot remove content posted by individuals, rather, they can only report it. “In several countries, YouTube has been banned,” observed Justice Alam, adding that in those countries, social media platforms are controlled by local laws. The court, subsequently, issued a notice to the Foreign Ministry and the Attorney General of Pakistan in the case and adjourned the hearing.