‘PM gave permission for sugar export not for subsidy’ 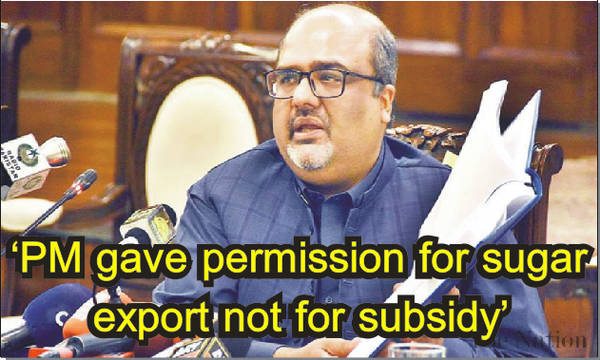 LAHORE - Special Assistant to the Prime Minister on Accountability Mirza Shahzad Akbar on Saturday said the sugar inquiry report is a charge sheet against former Prime Minister Shahid Khaqan Abbasi. While addressing a press conference in Lahore, Akbar said that Prime Minster Imran Khan gave permission for the export of the commodity not for the subsidy. "There was ample sugar stock in the country when the export was allowed," Akbar said and added the price was high in the international market at that time. He said that the sugar inquiry report was made public as soon as it was received from the commission.

“I will prove whatever Shahid Khaqan Abbasi said was a white lie and they [opposition leaders] are misleading the nation about the report, which is a landmark development.”Abbasi, earlier in the day, had accused the government of supporting sugar barons and said: "PM Imran, former Finance Minister Asad Umar, and Chief Minister Punjab Usman Buzdar are the real culprits behind the sugar scam." "The PTI government seems to be getting swept away with this sugar issue," he had remarked. Reacting to Abbasi’s criticism, Akbar stated that for the first time ministers had appeared before an inquiry commission and testified.