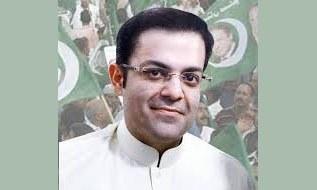 An accountability court in Lahore on Monday declared Suleman Shahbaz, son of PML-N President Shahbaz Sharif, a proclaimed offender in a money laundering case against the Sharif family and issued fresh non-bailable arrest warrants against him.

Accountability court judge Ameer Mohammad Khan issued the orders on a request of the National Accountability Bureau (NAB). The accountability watchdog informed the court that all of Suleman's properties have already been seized as per the court's earlier order.

During the hearing, Advocate Hafiz Asadullah Awan on behalf of NAB contended that Suleman did not appear before the accountability watchdog despite six call-up notices.

The counsel informed the court that the NAB chairman had already issued arrest warrants for the suspect in the case. He added that Suleman had fled from the country [to avoid NAB proceedings against him].

Submitting details of Suleman's properties, NAB informed the court that the bureau had seized the suspect's shares amounting to Rs2 billion in 16 companies. According to the NAB report, it also seized cash worth Rs4.1 million held in three banks accounts as well as $4,000 dollars in two different bank accounts of the suspect.

NAB alleged that assets worth Rs3.3 billion had been identified so far as illegally accumulated by Hamza Shahbaz, Suleman and their father Shahbaz. It said the whole family committed massive money laundering in the name of foreign remittances and loans.

Last year, Suleman had appeared before NAB Lahore regarding the provision of record of his family’s property.

In a notice issued to him, NAB had said: “During interrogation, Shahbaz Sharif has stated that all of his matters relevant to assets, income and expenditures are being looked after by you and you are acquainted with and in possession of such information/documents. You are requested to appear before a combined investigation team along with documents of all assets and properties”.

However, Suleman later skipped several hearings of NAB and left the country.

In May, a NAB prosecutor had said that Mohammad Mushtaq alias Cheeni, who was the manager of Ramzan Sugar Mills and had been offloaded from a PIA flight and arrested in April, had disclosed that Suleman used bank accounts opened in the names of his employees, who were either labourers or low-paid workers.

“I have been working for the two brothers since they started looking after their family’s sugar business in 2005,” Cheeni had said in his confessional statement recorded by a judicial magistrate under Section 164 of the CrPC.

A copy of the suspect’s statement available with Dawn had revealed that Cheeni claimed that Hamza and Suleman used to receive foreign remittances through bank accounts of his company, Mushtaq & Co. He had no information about the senders of the payment and he was only required to issue cheques of the amounts in Suleman's name, he had added.

The accountability court had issued non-bailable arrest warrants against Suleman in the money laundering and assets beyond means case in August as well. The warrants had been issued on an appeal of NAB.