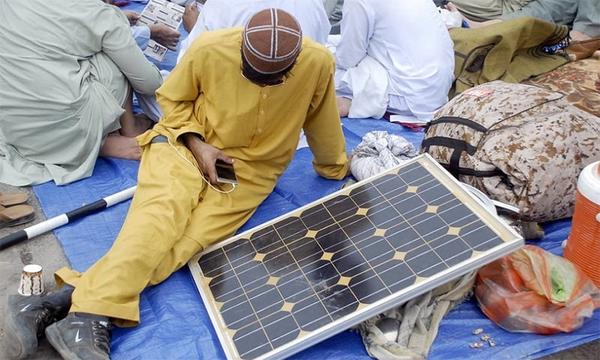 It's not easy camping outdoors, that too for an indefinite period, which is why participants of the 'Azadi March' came prepared with solar panels to Islamabad's H-9 area.

The equipment ensures that their stay at the dharna remains comfortable without them having to ask the government for any machinery in order to keep their gadgets charged.

The Jamiat Ulema-i-Islam Fazl (JUI-F) supporters — many of whom have arrived from other cities — have brought along solar panels with them to charge their cell phones and to light emergency lights at night. Several people in the 'Azadi March' arrived from Khyber Pakhtunkhwa in 10-member teams, similar to the pattern of Tableeghi Jamaat and brought enough gadgets and necessities to spend more than three to seven days at the sit-in.

Each team has its own solar panel. Those participants who did not bring one can borrow the panels from other teams.

"We arrived from Bannu and it will be easy for us to charge the mobile phone for our team," said Muhammad Hanif, a participant of the JUI-F sit-in.

He said that the solar panel could charge five cell phones at a time.

"We did not charge any fee from others for charging the cell phones from the participants as we came here for a cause — to get the resignation of the government who had been formed through rigged elections," he said.

Sajjad Khan, a participant from Peshawar, said that he and his companions brought the solar panels as there were reports that the government would not provide any electricity to the participants of the 'Azadi March'. The JUI-F leaders had also directed workers and supporters to make arrangements in this regard.

Khan said that cell phones were important in order to keep in touch with relatives and family members. However, participants were unable to access the internet, as services in the area have been suspended.

He said that internet was available when the participants arrived in the capital on Thursday evening. But later, he alleged, the government suspended internet services in the area so the people would not upload videos or pictures of the public meeting on social media.

Mohammad Tayyab, another participant, said: "We are peaceful and brought our own gadgets; [we] did not steal any electricity of the government."

He said that it was an old perception that seminary students or scholars did not know how to use modern technology or that they were averse to its applications and explained: "We are against using technology for evil purposes."