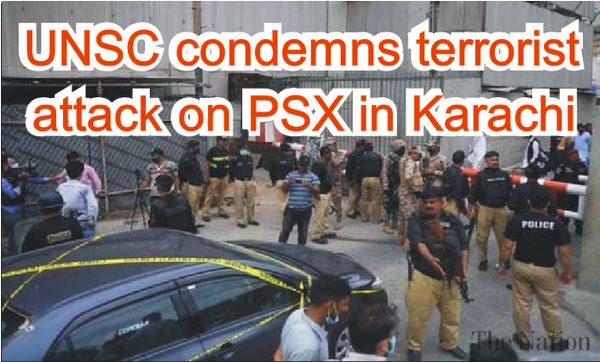 The UN Security Council has strongly condemned the “heinous and cowardly” terrorist attack against the Pakistan Stock Exchange (PSX) in Karachi on Monday, a move that India, according to informed sources, tried to block through its friends on the 15-member body, but failed. Four heavily armed terrorists attacked the PSX building, killing three security guards and a police officer before being shot dead by Pakistani law enforcement personnel who reacted swiftly.

Prime Minister Imran Khan and Foreign Minister Shah Mahmood Qureshi issued strong condemnatory statements, saying India was behind the terrorist attack in Karachi. “The members of the Security Council underlined the need to bring perpetrators, organizers, financiers and sponsors of these reprehensible acts of terrorism to justice and urged all States, in accordance with their obligations under international law and relevant Security Council resolutions, to cooperate actively with the Government of Pakistan and all other relevant authorities in this regard,” the Council said in a press statement.

The statement, which was adopted by consensus, was prepared and circulated to the Council members by China to signal its support to Pakistan. Diplomats told APP that India’s intensive efforts to block the statement collapsed in the face of widespread condemnation of the terrorist act in Pakistan by the UN Secretary-General Antonio Guterres, the General Assembly President, Tijjani Muhammad-Bande, and most of the Council members.

India’s desperate attempt to block the Security Council statement condemning the terrorist act is yet another testament to its support to terrorism in Pakistan, they pointed out. The Council’s statement said, “The members of the Security Council expressed their deepest sympathy and condolences to the families of the victims and to the Government of Pakistan and they wished a speedy and full recovery to those who were injured. “The members of the Security Council reaffirmed that terrorism in all its forms and manifestations constitutes one of the most serious threats to international peace and security.

“The members of the Security Council reiterated that any acts of terrorism are criminal and unjustifiable, regardless of their motivation, wherever, whenever and by whomsoever committed. “They reaffirmed the need for all States to combat by all means, in accordance with the Charter of the United Nations and other obligations under international law, including international human rights law, international refugee law and international humanitarian law, threats to international peace and security caused by terrorist acts.”