Third round of China-Afghanistan-Pakistan dialogue commences in Islamabad 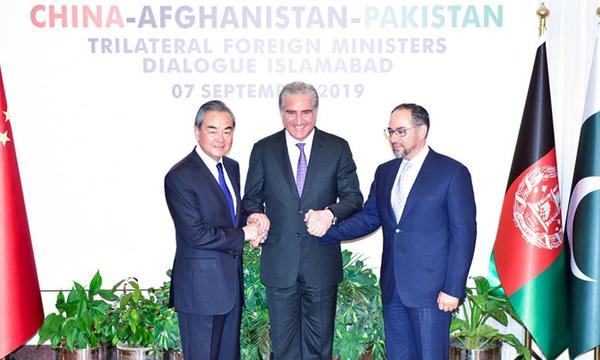 Islamabad is hosting the third round of China-Afghanistan-Pakistan Trilateral Foreign Ministers' Dialogue on Saturday.

The latest round of talks will cover trade, counter terrorism and ending Afghanistan's 18-year war. The forum was established two years ago, and the earlier meetings were held in Beijing and Kabul in 2017 and 2018.

The Foreign Office said in a statement that the foreign ministers of the three countries will also discuss cooperation in economic development.

Qureshi, while speaking on the occasion, said that the talks are happening at a key moment in the United States-led effort to negotiate peace in Afghanistan. He added that regional and domestic security will rely on ending the war in Afghanistan.

He termed the trilateral forum as a significant one and said that its importance will further increase with the improvement in peace and security in Afghanistan as it will open doors of economic activity and trade in the region.

The foreign minister said Afghanistan can also benefit from the multi-billion dollar China-Pakistan Economic Corridor (CPEC) and Gwadar port. He said peace and development in Afghanistan is important for overall regional development.

Talking about China-Pakistan relations, he said that the friendship between the two countries is time-tested. He thanked his Chinese counterpart for Beijing's support to Pakistan in the UN Security Council after India unilaterally withdrew occupied Kashmir's autonomous status.

Before the trilateral dialogue, FM Qureshi and his Chinese counterpart held discussions on bilateral relations and cooperation in diverse fields.

Earlier in the day, the two sides also signed a memorandum of understanding for educational cooperation between the two countries.

Under the agreement, Beijing will provide e-learning facility and aid the establishment of smart schools in Pakistan.

The signing ceremony was held at the Foreign Office. The Higher Education Commission's executive director and vice chairman of the Chinese International Development Cooperation Agency signed the MoU.