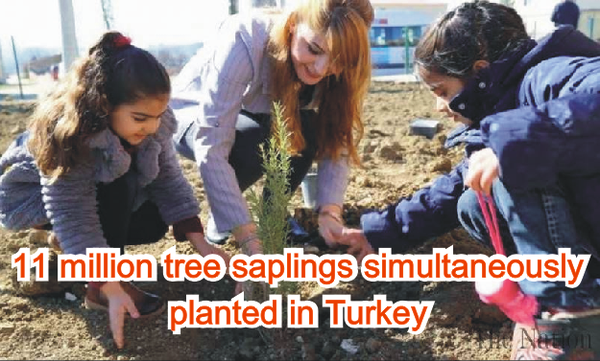 Millions of Turks on Monday simultaneously planted 11 million saplings across the country as part of a mass-planting campaign launched by the Ministry of Agriculture and Forestry. The campaign, dubbed "Breath Into the Future," aims at contributing to the agriculture while establishing a greener landscape for next generations, Minister Bekir Pakdemirli said in a statement posted online. "We ensured that 11 million saplings meet the soil in three hours at 2,023 different points in 81 provinces," he said. The planting started precisely at 11:11 local time with a view to carrying Turkey into the Guinness Book of Records by planting the highest number of saplings in an hour and creating the largest digital photo album of the event.

Despite the initial target of 11 million, nearly 14 million saplings were adopted for the campaign, with 212,000 in Istanbul, Turkey's biggest city, and nearly 340,000 in the capital Ankara. Last week, Turkish President Recep Tayyip Erdogan declared Nov. 11 National Forestation Day. Some remain skeptical toward the campaign, voicing criticism against widespread concretization and urbanization across the country.

Erdogan Atmis, a forestry specialist, was quoted as saying by Birgun, an online news portal, that replacing a destroyed ecosystem formed in over millions of years with unknown seeds is no more than a "simple deception." In his view, a forest ecosystem will not be formed immediately, but takes at least 50 years before it can be called a forest. "The campaign could only cover the concretization policies in cities and the massacre of nature," read a Twitter post.