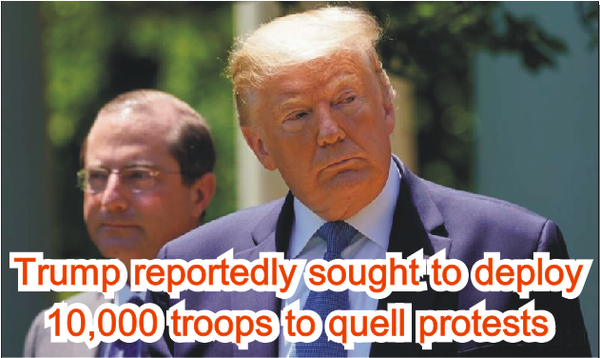 On 1 June US President Donald Trump said he would mobilize “all federal resources, civilian and military”, to quell protests against police brutality raging across America after the death of black man George Floyd, urging state governors to deploy the National Guard in great numbers to “dominate the streets.” US President Donald Trump wanted to deploy 10,000 troops to control protests in Washington, D.C., this week, according to officials familiar with the matter, cited by The Washington Post and CBS News.

“We need to get control of the streets. We need 10,000 troops up here [in Washington]. I want it right now,” Trump reportedly said according to a Pentagon official. The source is claimed to have revealed that Attorney General Bill Barr, Defense Secretary Mark Esper and Joint Chiefs of Staff Chairman Gen. Mark Milley strongly advised the US President against the move at a meeting in the oval office on 1 June. There has not been any official comment from the White House on the current report.