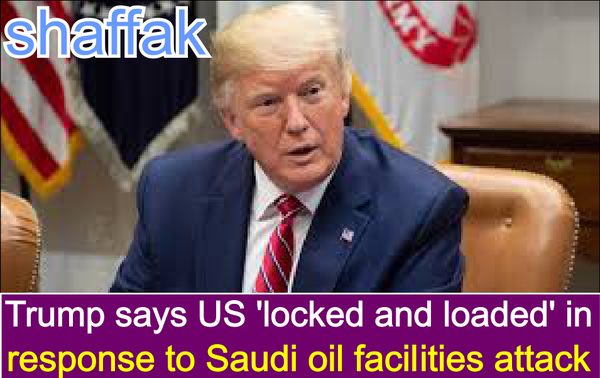 Tensions are flaring in the Persian Gulf after US President Donald Trump said on Sunday the United States was “locked and loaded” for a potential response to the attack on Saudi Arabia’s oil facilities.

"There is reason to believe that we know the culprit, are locked and loaded depending on verification, but are waiting to hear from the Kingdom as to who they believe was the cause of this attack, and under what terms we would proceed!” Trump said on Twitter.

The tweets on Sunday followed a National Security Council meeting at the White House and hours after US officials offered what they said was proof that the attack was inconsistent with claims of responsibility by Yemen’s Iran-aligned Houthi rebels and instead pointed the finger directly at Tehran.

A US official said all options, including a military response, were on the table, but added that no decisions had been made. The official spoke on the condition of anonymity to discuss the internal deliberations.

Iran called the US claims “maximum lies” and threatened American forces in the region. The attack dimmed hopes for potential nuclear talks between Trump and Iranian President Hassan Rouhani at the UN General Assembly this week.

“The Americans adopted the ‘maximum pressure’ policy against Iran, which, due to its failure, is leaning toward ‘maximum lies,’” Mousavi said in a statement.

Houthi leader Muhammad al-Bukhaiti reiterated his group’s claim of responsibility, telling The Associated Press it exploited “vulnerabilities” in Saudi air defenses to strike the targets. He did not elaborate.

Earlier, US Secretary of State Mike Pompeo had also said there was no evidence the attack came from Yemen, where a Saudi-led coalition has been battling the Houthis for over four years in a conflict widely seen as a proxy war between Saudi Arabia and rival Iran.

Which direction did the attack come from? 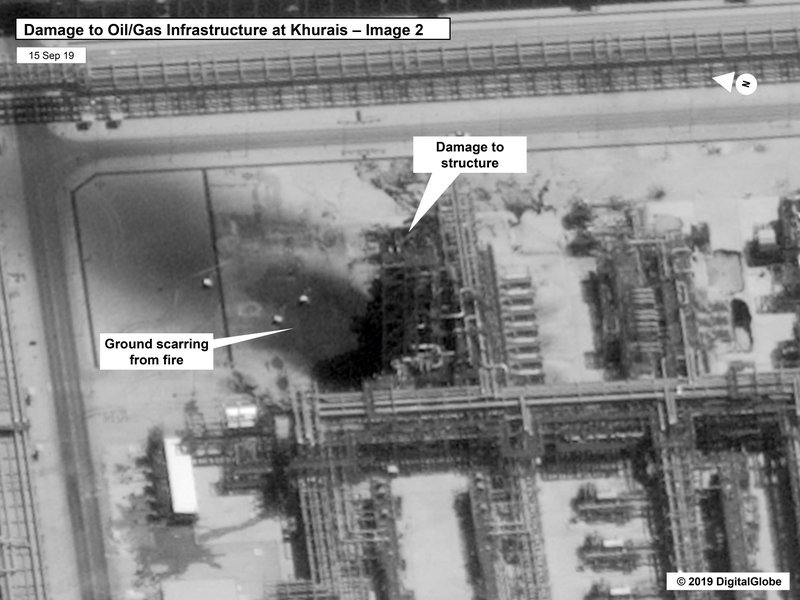 The US government produced satellite photos showing what officials said were at least 19 points of impact at two Saudi energy facilities, including damage at the heart of the kingdom’s crucial oil processing plant at Abqaiq. Officials said the photos show impacts consistent with the attack coming from the direction of Iran or Iraq, rather than from Yemen to the south.

Iraq denied that its territory was used for an attack on the kingdom. US officials said a strike from there would be a violation of Iraq’s sovereignty.

The US officials said additional devices, which apparently didn’t reach their targets, were recovered northwest of the facilities and are being jointly analysed by Saudi and American intelligence. The officials, who spoke on condition of anonymity to discuss intelligence matters, did not address whether the drone could have been fired from Yemen, then taken a round-about path, but did not explicitly rule it out.

The attacks and recriminations are increasing already heightened fears of an escalation in the region, after a prominent US senator suggested striking Iranian oil refineries in response to the assault, and Iran warned of the potential of more violence.

“Because of the tension and sensitive situation, our region is like a powder keg,” said Iranian Brigadier General Amir Ali Hajizadeh. “When these contacts come too close, when forces come into contact with one another, it is possible a conflict happens because of a misunderstanding.”

Actions on any side could break into the open a twilight war that’s been raging just below the surface of the wider Persian Gulf in recent months. Already, there have been mysterious attacks on oil tankers that America blames on Tehran, at least one suspected Israeli strike on forces in Iraq, and Iran shooting down a US military surveillance drone.