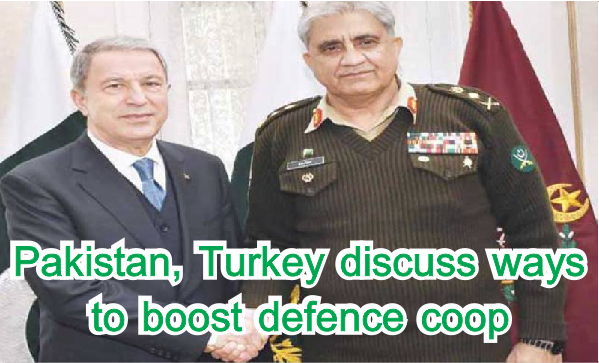 During the meeting, matters of mutual interest, regional security and measures to further enhance bilateral defence collaboration were discussed. The army chief said that Pakistan values its unique relationship with Turkey and would always stand by the Turkish brothers. The visiting dignitary appreciated Pakistan’s contributions for conflict prevention in the region and standing by Turkey and pledged the same for Pakistan.

Meanwhile, DG ISPR Maj Gen Babar Iftikhar briefed the military officers of the friendly countries, attending a course at the Command & Staff College Quetta. They were on a study tour to the ISPR headquarters in Rawalpindi, said the ISPR. It said that the DG ISPR had an interaction with the visiting officers and briefed them on the geo-strategic situation, environment, situation along the LoC, evolving threat spectrum and Pakistan’s role in the fight against terrorism, peace and stability in the region.