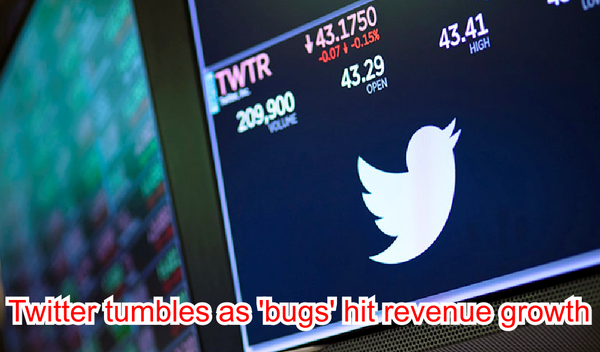 Twitter shares plunged on Thursday after reporting glitches that impacted its ad-targeting ability, pulling down revenue growth in the past quarter.

Profit for the third quarter was $37 million, a sharp drop from last year when the online messaging platform was helped by a large tax benefit.

Revenue rose nine per cent from a year earlier to $824 million, well below analyst forecasts, impacted by what the company called “revenue product issues.” Shares in Twitter slid as much as 20 per cent in pre-market trade on the disappointing results.

Twitter said revenue was hit by “bugs” which made it harder to deliver targeted advertising, as well as some seasonal factors.

“Unfortunately we had some missteps and bugs,” chief executive Jack Dorsey told a conference call.

“These are issues we identified quickly and are working quick to fix.” Twitter's investor relations team said the issue affected the ability to deliver ads, which make up the bulk of revenue.

“We also discovered that certain personalisation and data settings were not operating as expected. We believe that, in aggregate, these issues reduced year-over-year revenue growth by 3 or more points in Q3.”

Chief financial officer Ned Segal said Twitter is working on a fix but that the glitch is expected to have a negative impact in the fourth quarter.

The bugs mainly affected Twitter operations outside the United States, where ad revenue was up just five per cent compared with 11 per cent for the US.

Challenges ahead
The results highlight challenges for Twitter, which has struggled to keep pace with rival social platforms as it seeks to remove fake accounts, abusive content and manipulation efforts.

“The miss (on revenue) wasn't just because of tough comparisons, which were expected to dampen their revenue growth, but issues with their ad product. That could impact their performance in the all-important Q4,” analyst Jasmine Enberg of eMarketer said.

Twitter boosted the number of “monetisable” daily active users, the new measurement used by the platform, by six million from the past quarter to 145 million.

Twitter has stopped using a count of “monthly active users,” which was 330 million earlier this year, in favour of the new measure of daily users on the mobile app or website who see ads in their feeds.

Dorsey said the growth in users represents a “steady refinement of Twitter” as it works to improve the platform and weed out inappropriate content.

“This is an incredibly strong foundation to build upon,” he said.

Dorsey said Twitter has improved its automated systems to remove unwanted content, and now takes down more than 50 per cent “proactively” and “without a bystander or first person report. “