UK PM Johnson will ask for Brexit extension if no deal by October 19, court told 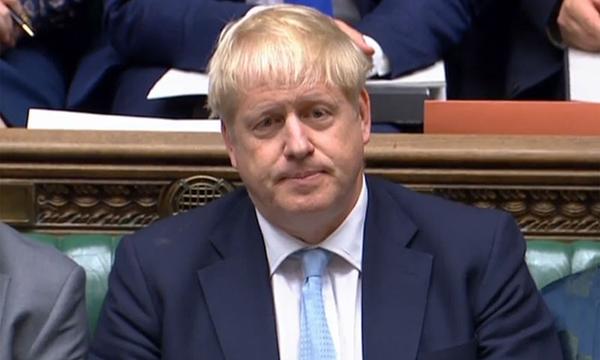 British Prime Minister Boris Johnson will send a letter to the European Union asking for a Brexit delay if no divorce deal has been reached by October 19, the government acknowledged for the first time on Friday.

With the clock ticking down to Britain's departure on October 31, Johnson has consistently said he will not ask for a Brexit delay, but also that he will not break a law that forces him to request one if no withdrawal agreement deal has been agreed.

He has not explained the apparent contradiction in his comments and opponents say they believe he will seek some kind of legal escape route or try to pressure the EU into refusing to agree to an extension request.

On Wednesday, Johnson submitted new proposals to the EU that he hopes will lead to a withdrawal agreement, although the bloc has responded with deep scepticism, saying more concessions are needed if a no-deal Brexit is to be avoided.

Just over a week after a British Supreme Court ruling that Johnson had suspended parliament unlawfully and weeks before the deadline, anti-Brexit campaigners again turned to judges to try to ensure the exit will be delayed if no deal to smooth the transition has been agreed.

They filed two linked challenges to Johnson in Scotland's senior courts, seeking an order forcing him to abide by the “Benn Act”. This was the law passed by parliament last month requiring Johnson to seek a Brexit delay if he has not agreed a withdrawal agreement in the next two weeks.

If he does not, they want the court to use its powers, not available to English judges, to write to EU leaders itself requesting an extension on his behalf.

While saying he will comply with the law, Johnson has said he would rather be “dead in a ditch” than ask for any delay and that Britain will leave the EU “do or die” on October 31.

With time running out, European Council President Donald Tusk and EU parliament head, David Sassoli, are due in Berlin for talks with German Chancellor Angela Merkel on Tuesday.

Sassoli will also see French President Emmanuel Macron in Paris on Monday and Johnson in London later on Tuesday.

The legal challenge, fronted by tax lawyer Jo Maugham and Joanna Cherry, a lawmaker from the Scottish National Party, also says that if Johnson fails to comply with the Benn Act the courts could impose penalties “including fine and imprisonment”.

In submissions to the Scottish court read out by the campaigners' lawyer, Aidan O'Neill, the government said Johnson accepted he was obliged to send a letter to the EU on October 19 asking for a delay if no deal had been struck and that if an extension was granted, Britain would also agree to it.

O'Neill said the submissions were “directly contrary to what the prime minister was saying to parliament yesterday”.

A spokesman for Johnson said he could not comment on ongoing legal proceedings.

In Brussels, an official dealing with Brexit said: “It is not for us to comment on the UK's internal constitutional arrangements or on legal proceedings. But time is already tight and the only way to avoid no deal is to ratify a deal or to agree an extension, so having clarity is going to be pretty key.”

BBC political editor Laura Kuenssberg said on Twitter that a senior source in Johnson's office had said they could still avoid any delay.

“The government will comply with the Benn Act, which only imposes a very specific narrow duty concerning parliaments letter requesting a delay,” she quoted the source as saying.

“The govt is not prevented by Act from doing other things that cause no delay including other communications, private and public. People will have to wait to see how this is reconciled.

“The government is making its true position on delay known privately in Europe and this will become public soon.” Scotland's Outer House of the Court of Session will give its ruling on Monday on whether it will order Johnson to comply with the Benn Act, Maugham said.

Johnson's new proposal is intended to offer arrangements for the post-Brexit border between EU-member Ireland and the British province of Northern Ireland.

The EU wants it reworked by the end of next week to yield a deal at the October 17-18 summit of 28 national leaders in Brussels.

“If, at the end of next week, there is no sign of serious movement, then it's probably too late for a deal at the summit,” said an EU diplomat dealing with Brexit. “We need substantial movement on the UK side, especially on customs.”

Despite the Benn Act, Ireland's Foreign Minister Simon Coveney said the EU remained concerned about the possibility of a no-deal Brexit, which many businesses fear would have damaging economic repercussions for Britain and the EU.

“I think British politics is so unpredictable right now, that we can't rely even on the law in Britain in this context,” he told RTE on Friday.

The legal challenge is the latest case that has seen judges called in to arbitrate over Brexit, with all the high-profile cases so far going against the government.

Brexit supporters have accused judges of overstepping their powers by getting involved in political matters. While Johnson said he respected last week's Supreme Court decision, he also said the judges were wrong.