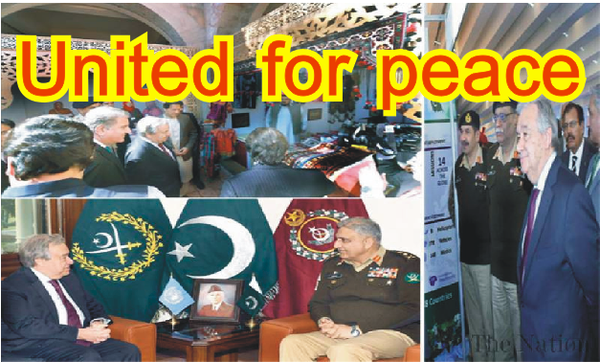 General Bajwa said that Pakistan is committed and determined to achieve "a stable, peaceful and normalized Pakistan.” The UN Secretary-General said that there is a need to implement UN resolutions on Kashmir and acknowledged Pakistan's contribution in UN peacekeeping missions and extraordinary achievements in counter terrorism. The Auditorium at the Center for International Peace and Stability (CIPS), at the National University of Science and Technology (NUST), was filled with proud blue berets worn over smartly presented Army Uniforms. It was a dazzling display of the excellence and professionalism that is the hall most of the UN Peacekeeping forces from Pakistan. Flanked by the DG MO, CGS, Rector NUST, and former Military Advisor the UN, the Secretary-General of the United Nations broke ground for the United Nations peacekeepers training center which would soon cater to the whole region.

Addressing the ceremony, chief guest Antonio Guterres, United Nations Secretary-General, started by asking the audience to rise to observe a moment of silence for the Pakistani peacekeepers who laid down their lives to protect some of the most vulnerable populations of the world. “Pakistan is one of our most consistent and reliable contributors to peace efforts around the world… Since the first Pakistani deployment to the Congo in 1960 Pakistan has contributed more than 150,000 personnel to 41 peacekeeping missions in 23 countries. …157 Pakistani military police and civilian personnel have paid the ultimate price while serving under the United Nations flag. We will never forget their sacrifice.” Referring to the current deployments, the UN Secretary-General said, “Today Pakistan is the 6th largest contributor of troops and police, with more than 4,400 uniformed personnel serving in 9 UN peace operations, including in some of our most dangerous missions, like it is the case of the Central African Republic and Mali. Pakistani officers are also playing an important part as the first commanders and chiefs of staff. Pakistan contributes critical equipment including a helicopter unit in Mali. I have seen for myself the professionalism, the commitment of Pakistani military police and civilian personnel in our missions and I thank you for your important contribution to creating a safer and more peaceful world. United Nations peacekeeping is a beacon of hope for millions of people affected by conflict and instability.” Referring to the Action For Peace initiative, he said, “Pakistan was the first country to endorse the declaration for shared commitments on A4P.…Over the past two years, more than 150 member states and 4 partnering organizations have followed Pakistan’s lead.”

Pakistan’s peacekeeping efforts passed the 15% female recruitment milestone and Pakistan’s female ratio of peacekeeping troops actually stands at 17%. Pakistan is also the proud contributor of the very first female engagement team to the UN peacekeepers. “With the appointment of the first-ever Pakistani female engagement team in… Congo, Pakistan is a leader in championing women peacekeepers and an example for other troop contributors. This inspiring all women Pakistani team has implemented successful projects on vocational training, medical outreach and psychological support and improved the information gathering that feeds into security assessments.”

Pakistan has also steadily adopted and championed the fresh practices instituted by the UN in peacekeeping standards. “I am extremely grateful to all countries that assumed leadership in order to have better trainers, better training and better accountability of their forces, and this has contributed enormously to strengthen the image of peacekeeping around the world and Pakistan has been absolutely exemplary in that regard.” The Secretary-General ended his tour of NUST with a visit to a photo exhibition. He also signed the visitors' book, and took a photograph with the UN peacekeepers, outside the CIPS building. On this occasion Rector NUST Lt. Gen. (retd) Naweed Zaman said that above 30000 Pak army personnel have been trained in the international center for peace and stability.