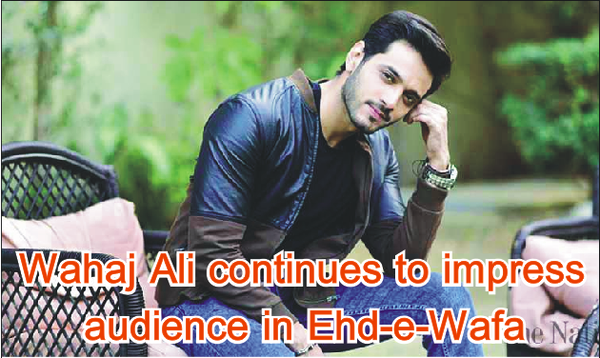 LAHORE    -   Wahaj Ali is a rising star in the television industry and has given many amazing performances in the course of his career in the industry.  He has proven to be a versatile actor with some brilliant acting skills and is improving with every new serial. With phenomenal acting in Mah-e-Tamam, Haiwaan, HariHariChooriyan, Bharam and more recently in Dil-e-Beraham, Wahaj has shown his talent and diversity. He is seen recently in one of the most popular dramas of this year “Ehd-e-Wafa” and has won hearts with his on-point acting. Wahaj stars as Shariq, one of the SSG boys. The SSG boys are a group of inseparable friends who are involved in all sorts of fun activities. They try to enjoy their life at college to the best with their fun-filled reckless adventures. Shariq is also a part of the gang and a part of all the activities the gang carries out.

As the story progresses, the dynamics change and they all get separated as college life ends. However, there is still a lot left in the drama, which means we will get to see more of SSG boys and Wahaj. Wahaj Ali has so far portrayed Shariq’s role on screen in a phenomenal manner. He makes his scenes a treat to watch and makes you feel for him and his struggles by his impeccable expressions. His solid performance when he is beaten by his sister after getting caught was nothing but appreciable and showed the acting potential he has. While previously he has usually played a romantic hero, he also aced this different role of a college student with perfection.  Wahaj Ali is, no doubt, a wonderful addition to the Pakistani drama industry and he is growing to be a commendable actor with time.