UNDP to help with water provision in GB 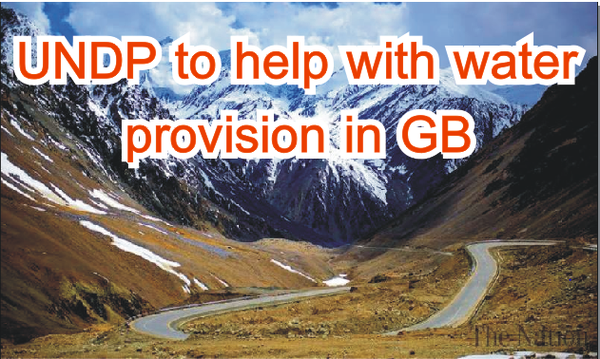 The GLOF II project in collaboration with University of Baltistan (UoB), AKRSP and Wafa Foundation Skardu inaugurated a glacier grafting campaign in Kuwardo village Thursday. Over a hundred volunteers from the local community participated with a high female participation. The University of Baltistan is currently working on research and development in Baltistan and will provide technical support for the campaign. Prior to the inauguration, local community volunteers were trained by experts for glacier grafting.

Senior Minister GB, Haji Akbar Taban, Assistant Resident Representative, UNDP, Mr. Amanullah Khan and other dignitaries from government departments, and University of Baltistan were present at the inauguration. Kuwardo is a drought hit village in Gilgit-Baltistan where people lack access to clean drinking water as well as water for irrigation. Glacier grafting will help local community in having access to clean drinking water. The community's motivation to complete this effectively is remarkable and stems from the successful completion of a similar project by WASEP.

The process involves collection of ice masses from six different locations of Baltistan Division (Kurdunoo, Istak, Rundoo and four of the glaciers of Shigar District). After the inauguration ceremony, six teams of volunteers trained by UoB and AKRSP set out for the target points for glacier grafting. The teams will also collect water from different streams and rivers from these locations with the help of volunteers. Under the GLOF II Project, a volunteer plantation drive, 'Adopt a Tree Campaign' with the collaboration of University of Baltistan, Skardu Hussainabad campus was also held yesterday. A large number of students participated in the campaign which directly contributes to the Prime Minister's Clean and Green Pakistan initiative. The campaign was launched in Hunza this year by the Advisor to Prime Minister on Climate Change, Mr. Malik Amin Aslam.