Wind-thundershowers expected in most parts of country, Heavy rainfall in Karachi 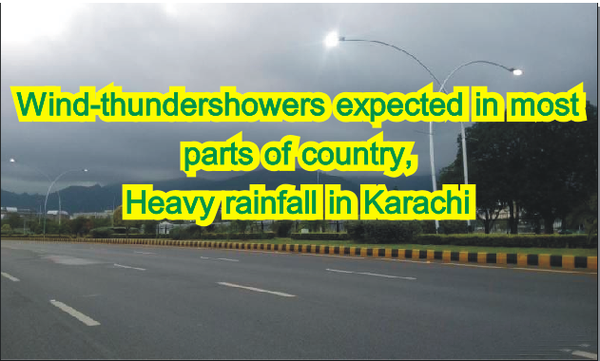 Rain/wind-thundershower weather is expected to be experienced across the northeastern Balochistan, Sindh, Punjab, upper Khyber Pakhtunkhwa, Kashmir and Gilgit-Baltistan during the next 12 hours. The cities located in upper-half portion of the country experienced consistent rainfall and low temperature due to monsoon system.

At least five people died as torrential rains wreaked havoc in the metropolis on Monday. The victims included a woman and children. Two of those died as the roof of a house in Ibrahim Hyderi collapsed, while a three-year-old girl died when a wall in Malir's Shamsi Society, they said, adding that a  woman was electrocuted to death in Liaquatabad, while a child died of electrocution in Mominabad, Orangi Town.

The impact of monsoon system was in Karachi's southeast since the morning and had strengthened due to humidity from the sea, leading to the first rain in Pakistan's financial capital during the monsoon season.  Earlier today, the Pakistan Meteorological Department (PMD) director had noted that wind-thunder system was observed near Karachi and the rain spell was "strong."